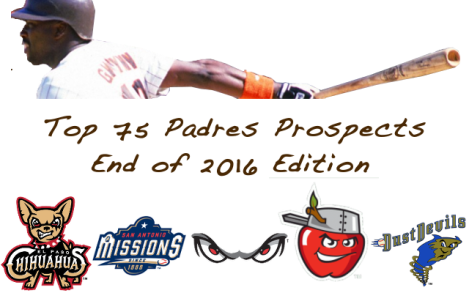 The end of 2016 means an updated prospects list. There’s not a whole lot of movement up top, but some pretty significant movement once you reach the thirties. A few players made large jumps, highlighted by Tre Carter, while some notable prospects drop considerably: Javier Guerra, Jerry Keel. There are seven new prospects on the list: Josh Naylor and six others who were previously unrated.

Before I begin, let me remind the reader how I rank players, quoting from the original post:

Everything comes back to World Series odds. A player with some probability of being a high impact player will be ranked above players with a high probability of making the Major Leagues as a replacement-level player. That’s why several relatively unheralded DSL players rank above Auston Bousfield, for example.

And one final note: if we were ranking Padres assets, I would rank their 2017 first round pick as their number two prospect.

The top two shouldn’t surprise anyone: Margot is a rare prospect and Espinoza compares with a young Felix Hernandez. Hedges retains his status as number three prospect as he continued his offensive breakout through the end of the season.

I bumped Quantrill up the rankings based on his strong strikeout, walk, and homeruns allowed rates. (The true outcome data is most important for predicting future pitcher success.) I think his early results indicate that it’s possible he becomes an impact arm by 2019 or, in rare circumstances, 2018.

That meant that both Renfroe and Paddack fell. Despite the early success at the plate for Renfroe, what will ultimately determine his usefulness are his glove and ability to draw walks. His comps aren’t great, but I’m willing to overlook that for the power upside. Paddack fell for an obvious reason: he had Tommy John surgery.

I won’t blame you if you have Urias in your top five, but I want to see him face better minor league pitching before putting him ahead of scout favorites or guys closer to the MLB level. I won’t be surprised if, after Margot loses his prospect eligibility, and with another year of solid production at AA, Urias becomes the number one prospect. His contact numbers are insane, he’s very young, and his defensive metrics (by Clay Davenport) grade really well.

I’ll be shocked if Lamet isn’t in the 2017 rotation. He received promotions in 2016 that culminated with a stint in El Paso to end the year. He looked good at every stop, putting up 158 strikeouts in 150 innings, while allowing just 8 homeruns and keeping his strikeout to walk ratio above 2.5.

Gettys dropped due to a pretty meh end to 2016 that saw his overall line on the year regress. He struck out 68 times in July and August over 234 plate appearances. He also stopped stealing bases effectively in Lake Elsinore, going just 9 for 15 in 60 games after going 24 for 34 over 68 games in Fort Wayne. I don’t think these are majors concerns and he still has monster upside, but it does give me some pause.

Mason Thompson had a nice debut in Rookie ball, getting in a dozen effective innings. It seems weird to focus on small samples, but pitchers who end up having huge impacts at the Major League level tend to dominate almost every small sample in the minors. That Thompson had a good debut doesn’t guarantee anything, but it does mean he avoided the early shit list. His stuff also just looks completely filthy.

I’m not a huge Naylor fan, mostly because he’s not currently dominating the minor leagues and he plays first base. He does have a little Prince Fielder in him, though, and his strikeout rates show he’s not being overpowered. He’s also still really young and fairly advanced in a few ways players his age generally aren’t, so I consider him fairly interchangeable with Hudson Sanchez.

Tre Carter had the most meaningful jump of any prospect. He was drafted and signed as a high upside project, but quickly eliminated the project narrative. In limited time, he put up an OBP above .400 on a 9/10 BB/K split, two triples, and a dozen singles. For someone described as “the ultimate tools/upside selection“, it was a great debut.

Guerra drops considerably, and I’ll think you’ll see that from every major prospect outlet. The strikeouts were up, power was down. I’ve read that he looks “lost” offensively. 22 may still be friendly, but a shortstop with power upside will keep you towards the top of almost any prospect list.

Reed didn’t show much offensively, but it’s too early to definitively draw any conclusions on him. That said, he’s closer to bust than he was when he was drafted, so he gets knocked down a little.

Rosario got promoted from the DSL to the AZL late in the year, and performed fine. Consistently the most productive position player for the Padres’ DSL squad, he’s a player who could really rise up these charts with a big 2017.

Ty France had a really nice year, earning a promotion to Lake Elsinore where his strikeout rate stayed unchanged (below 20%) but his ISO went up. Between Fort Wayne and Elsinore, he put up a combined slash line of .271/.387/.420 with 38 extra base hits. The walks did dip after the promotion but the overall line is too good to ignore.

Lucchesi dominated more than any recent draft pick I can remember. After leading the entire NCAA in strikeouts, and as an older prospect, it was sorta expected. But seriously: he struck out 56 in 42 innings while allowing just 3 walks and no homeruns. It’ll be interesting to see if he has success against more advanced hitters; if he continues to dominate through AA, it would push him up to borderline top ten status.

Suwinski debuted in the AZL and showed good plate discipline. Strikeouts were under 20%, walks above 10%. We didn’t see much power, but I expect that’ll develop. That he didn’t put up a turd in his first 100 plate appearances solidifies him on the prospect map. I bumped him up for that reason alone.

Lockett had a really successful 2016. I’ve bumped him up a lot, but I’m not bullish on his odds of being a true impact arm. Again, these rankings are predicated on the Padres winning the World Series. Guys with third starter upside aren’t going to be treated favorably by those standards. However, he has really good control and has had success up through AAA now. I think he’ll be a contender for a rotation spot in 2017, with a high probability of making starts even if he doesn’t win a job out of spring.

Melean ranked 74th last time because of his high signing bonus in Preller’s first international class but low performance in his first 50 ABs or so. He ended the year hitting .291 with an OBP over .400. It may have been helped by guys graduating from the DSL, leaving him with easier arms to hit, but it’s still a good sign.

Keel drops as much as anyone after some poor performances post promotion(s), allowing 7 homeruns in less than 40 innings in Lake Elsinore and San Antonio. His game is keeping the ball on the ground, which is tough in warm weather places like Elsinore and San Antonio, so I’m not too concerned, but it was a pretty disastrous result for him. Since there’s a chance it just means he’s hittable, I have to knock him down considerably.

Phil Maton keeps moving up the org and keeps dominating. I’ve said multiple times that last year’s San Antonio bullpen is the future Padres bullpen, and Maton highlights this group. He struck out 78 in 51 innings last year, with just 11 walks. He could make the 2017 roster.

Some reconfiguring of the back end of the top 75 and a lot of new names.

Trey Wingenter was a 2015 pick, but he continues to put up great true outcome numbers. He just passed the 80 professional innings mark and still hasn’t allowed a homerun. At 6’7″, he’s another Padre farmhand with a chance to be a late-inning reliever at the MLB level.

Dayan Olmo almost (ha!) made the list last time, but had a nice end of the season to push himself into the top 75. He’s a bit old for an international prospect, but it seems to be coming together for him. He played both centerfield and corner outfield, but his calling card will be his bat.

Jose Ruiz was one of the lone $1 million international signings under Tom Garfinkel’s quantity over quality approach. He was a catcher until the middle of last year when he was converted to relief pitcher. He dominated. There is a long history of minor league catchers converting to relief pitcher, including current Dodgers closer Kenley Jansen. I think Ruiz becomes a legit late inning prospect with this position change.

Jose Carlos Urena would be rated much higher if he wasn’t suspended in 2016 for PEDs. I think he could jump back up the rankings with a strong 2017.

Chris Baker was a 2016 draft pick that had a nice debut. His defensive metrics, as estimated by Clay Davenport, were pretty absurd. He also showed a little bit at the plate. He’ll be 22 by opening day, so he’ll have to show more quickly, but he’s worth considering as a possible future Padre.

Reinaldo Ilarraza dropped a bunch after his promotion from the DSL to the AZL. He struck out over half the time in the AZL.