In a new recurring trend, Marver dropped the ball last week AGAIN in getting out the hot, new weekly digest: This Week In Padres Twitter.  It’s clear that Marver doesn’t recognize the prestige of the weekly Jaggy Award for best tweet of the week.  Hopefully we can all shame Marver into focusing less time on Chargers tweets, and more fulfilling his obligations right here on Gwynntelligence.com.  Let’s get to the links.

We’ve talked for a while about how 2017 will have a much better Lake Elsinore Storm experience than a 2017 Padres experience.  The Storm have the best prospects, cheap tickets, a great stadium, and are only an hour away from San Diego.  This is your guide to making it happen, including how to make it work with a kid.

As a staunch defender of Chipotle, I was pleased to see that Wil Myers is still a frequent customer.  Jodes did a great Spring Training report.

Gaslamp Ball – Spring Training Team Stats Do Tell Us Something

I’m a sucker for any kind of uncommonly seen statistical analysis.  Jay Stokes did an analysis finding correlation with Spring team OPS and regular season performance.  No analysis is perfect, but most analyses are interesting, and this one was interesting.

East Village Times – The Return Of The Affable Aki Otsuka

I could never leave out a post dedicated to all time Padres fan favorite Akinori Otsuka, complete with his Corky’s commercial.

Fangraphs – Getting These Padres To The Playoffs

The Kept Faith with Padres Jagoff and Andy Keatts

This week, The Kept Faith brought in their most illustrious guest, me.  We talked Jabari Blash, WBC, and solidifed the fact that Rookie of the Year is a better baseball movie than Little Big League.

This episode of Generally Speaking, with John Gennaro, was one of the best, if not THE best.  Longer form than the usual 30 minute episodes, Steven Woods shows why he should have been the slam dunk choice to handle 94.9 Padres duties.  The dude is not only interesting and compelling to listen to, this podcast makes it very apparent that he knows his baseball and he cares about the game.  In short, he’s the anti-Herrera.  If only 94.9 weren’t run by a complete dummy, we’d have radio coverage to be proud of.

File Photo of Kevin Callahan, the architect of the 94.9 Padres Radio suckage 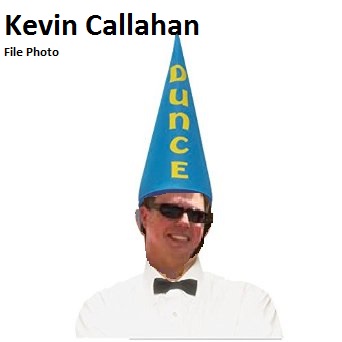 This one was an oldie but goodie and resurfaced via retweets after the 0.5 out of 10 soreness level that Jeff Sanders reported for Manuel Margot led to 3 weeks out of the game.

This week, we are unveiling a new feature here on This Week In Padres Twitter, and especially during weeks that Marver fails to get this post together.  We’ll highlight Marver’s absolute worst tweet of the week and lay tons of ridicule down on him.  The hardest part will be narrowing it down to one!

To be fair, Marver also was in the running for this week’s Jaggy award with this one:

They routinely play in < 30,000 seat stadiums, but you ranked Bud Black 25th in Padres history so what do I know. https://t.co/wJR08ubUzt

I will always value people that tweet about what an out of touch, paid shill Bill Center is.

You have these good feelings about that great Bill Center burn, and then Marver goes and does this:

But being an extended family member is the most proven method to becoming a front office exec! https://t.co/zHyHEQLOWr

SHUT UP ABOUT THE CHARGERS ALREADY.

Anyways, the first tweet is by far the worst, and is the inaugural Terrible Marver Tweet of the Week.