Over the years, there’s been no bigger supporter within the Padres online community of MLB’s, and specifically the Padres’, efforts to grow the game within Mexico. I attended the Padres’ exhibition series against the Astros in Mexico City in 2016 and loved it. As soon as the Padres-Dodgers regular season series in Monterrey was announced, I pounced. The game was actually supposed to take place in the Mexico City Red Devils’ new stadium, but due to the 2017 earthquake in Mexico City, MLB moved the game to Monterrey. New city in Mexico to check out? I was sold. After a lot of consternation in figuring out how to buy tickets, a lot of drama related to a former Boston mobile party DJ holding a childish grudge, and figuring out logistics of how to get down there, the weekend finally came. Instead of focusing on the local team executive holding a C-level executive job with no college degree but with a strong track record of playing the character “Big Bamboo” on WEEI Boston having a grudge against a small time blogger/podcaster, I thought it was more productive to focus on just what a great time these trips can be.

First, how do you get down to Monterrey? The standard method for most people is to check flights on Expedia or Travelocity out of SAN to Monterrey. For me, the standard method is to check what I can use frequent flier miles on, generally on Alaska, United, American or one of their codeshare partners. Neither method is a great one. Monterrey has no direct flights out of SAN. But hey, what about this airport in Tijuana? This trip provided me a great chance to finally try flying Volaris, using the relatively new Cross Border Xpress, and checking out TIJ. The Volaris flight ended up being $175 round trip TIJ-MTY, which included an upgrade to exit row, as well as round trip through Cross Border Xpress. If you haven’t flown out of TIJ, you drive to Otay Mesa to the Cross Border Xpress facility, which is gleaming, new, and impressive. You pick up your prepaid Cross Border Xpress ticket, show it and your boarding pass at the entrance, and walk in a raised tunnel over the border and directly into the TIJ airport. You then clear security and customs, and voila, you’re in the TIJ terminal. Full disclosure, TIJ is one of the worst airports I’ve ever been in, but it looked like much of it was under construction to improve the facility. Volaris was fine, although they weigh your carry-on bags.

After arriving at the Sheraton Ambassador in downtown Monterrey , I did my customary run through the city to check out the surroundings. Monterrey’s downtown is relatively compact, made up of a commercial district and Barrio Antiguo. Barrio Antiguo is made up of colonial era buildings that also serves as the home of trendy bars, restaurants, and nightlife. MLB hosted a fanfest in the center of downtown on the Macroplaza. This fanfest is similar to what MLB put on in Mexico City, although, despite it being for a regular season series this time around, was much smaller in scale. The fanfest had typical fanfest stuff: radar pitch, batting machine, mascots, and a make-your-own-Topps-baseball-card booth. It was cool, although the crowds were pretty sparse, especially after seeing the response in Mexico City.

Monterrey also revitalized part of their downtown by building a manmade riverwalk connecting Barrio Antiguo to an amusement park. There weren’t many people out at the cafes along the “river” but it was very pleasant, despite the rain that was starting to fall.

Monterrey is one of the capitals, along with Northern Baja, of Mexico’s craft beer scene. I was eager to see if the reputation was deserved. Unfortunately, Yelp first led me to Sierra Madre Brewing Co, which could best be described as Gordon Biersch except with exceedingly terrible beer. One of the red ales I tasted was infested with diacetyl butteriness. 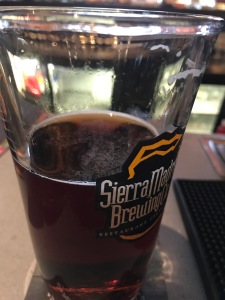 On the way back to the Sheraton, I ran into my first example of Dodgers fan savagery, as the good people in the Monterrey police department were detaining a Doyer fan that had likely consumed too much terrible Sierra Madre cerveza. 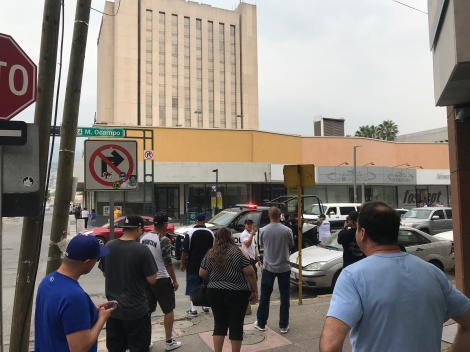 To pregame for the Friday game (as I would no longer need to get to the ballpark early to throw a first pitch, thanks Wayne!), a contingent from #PadresTwitter met up at Almacen 42, a trendy craft beer bar in Barrio Antiguo. This place did not mess around, just check out the beer list:

Pricing wise, we’re talking $2.50-4.00 for a full pint of craft beer. The playlist was nothing but mid to late 90s rock, pop punk, and ska. Somehow, Almacen 42 came closer to the dream of Skadres than the Padres ever have. Almacen 42 earned itself a return trip the next day, and if I make one recommendation for future visitors to Monterrey, it’ll be Almacen 42. 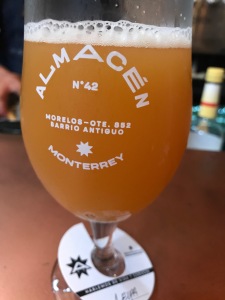 After a fairly quick Uber to Estadio de Beisbol Monterrey, we were met with a wall of people trying to get into the ballpark. Petco Park and the Padres have SERIOUS issues with getting large crowds into games, this was infinitely worse. There were 100 yard lines of people with no idea where they lead.

It’s hard to tell in the photo but these lines are snaking back 100 yards from the gate, and they weren’t a straight line, they had all kinds of zig zags and double backs.  We finally got in, and realized that Platino VIP tickets were not only the section behind home plate (which we expected), but also included an area behind home on the equivalent of the Toyota Terrace level featuring arm chairs and in-seat service. It was fine, but I probably wouldn’t spend $250 on these tickets again. As far as the game goes, it was dreadful. Driving rain poured throughout the game, and word going around the stadium was that MLB would not postpone the game. I’d generously estimate the Dodgers/Padres fan split at roughly 90/10. Acee, who never left the booth, or his hotel, reported that there were loud contingents of Padres fans starting Let’s Go Padres chants. A chant would start by a couple dudes down by the dugouts, and then 100 Dodgers fans would jump in and override with Let’s Go Dodgers chants. As we all know now, the Dodgers threw a combined no-hitter against the hapless Padres. Surprisingly, Dodgers fans didn’t gloat, it was more of a “hey dude, sorry you Padres fans have to go through this.” It warmed the cockles of my heart.

The next day, it was time to sample Monterrey’s most famous delicacy: cabrito. Cabrito is young, baby goat, slaughtered before the meat gets gamey. El Rey Del Cabrito is one of the most famous spots for this delicacy, and can only be described as overly ornate and opulent for a place slinging goat carcasses. We immediately ordered micheladas and half of a goat. A heaping pile of meat arrived at the table, along with rice, beans, tortillas, and salsa. With beers, this feast cost us $65 including propina. The food was obviously great.

After a great podcast session with @LybargerBrewery that got so heated a glass was smashed in the Sheraton Ambassador club lounge, we headed down the street to another craft beer locale, Metapatio (photo courtesy of @KrissySD). 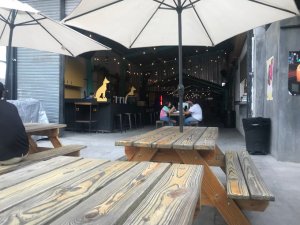 This place was like a semi-outdoor beer hall where each local brewery had a little bar with 4 or 5 of their beers on tap, along with a few food options. If you wanted to compare, it’s kind of like how the Quartyard is, except wth all beers. Another highly recommended spot. Another Uber to Estadio de Beisbol later, and there’s garbage Bryan Mitchell on the mound. Green mercifully pulled him early, and the Padres went on to win the game. Real quick on the food at Estadio de Beisbol, there were a few standouts. Most of the attention was on the giant hot dogs, but I stuck to tacos brought to my seat. I also tried the elote cup which was great. Wandering around, I got to see some of the food stands that were parked outside of the outfield, saw a delicious rotisserie chicken place on the lower concourse, as well as a spicy potato cup which the rest of the #PadresTwitter contingent was raving about, they were truly una bomba de sabor! 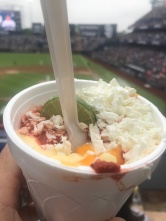 The atmosphere at Estadio de Beisbol was electric for most of the weekend, despite the crappy weather. 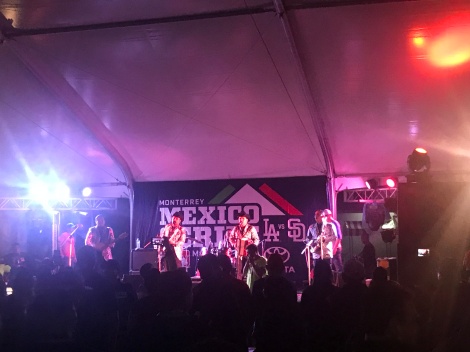 This would be my last night, and we hit the town hard. Club Iguana is a rock club located in Barrio Antiguo. It had three stories, along with three different stages featuring, that night, 90’s and 2000’s rock covers. #PadresTwitter parked itself on the rooftop, where we delightfully discovered they sell 40s of Tecate, paper bag and all, for the equivalent of $2. We befriended the locals, played on tinder, on the day that the Padres shelved Hedges for elbow pain we talked to pediatric oncology residents about what BS the Padres’ official stance that MRIs give confusing results due to swelling or interpretation, closed the bar down, and then ate amazing street hot dogs as we stumbled back to the hotel. 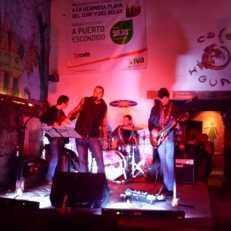 Monterrey was a magical city with a great spirit. Along the way, residents of Monterrey were delighted to show off their city. Before I flew down, much of the discussion around Monterrey revolved around it’s place as a cartel killing ground, bodies hung from freeway overpasses, and gunman storming places like Cafe Iguana to execute victims. Much of this is in the past, and Monterrey was eager to show off its best assets. Everyone was warm, friendly, and hospitable. The food was excellent, the beer was top notch in quality across the board (they even nailed a hazy), the nightlife was fantastic. At no point did any of us feel uncomfortable and unsafe. And it was only 2.5 hours from TIJ. Much like Mexico City, I fell in love with Monterrey, and am excited to go back. If the Padres continue playing games in Mexico, I cannot recommend the experience enough to anyone thinking of going. Flights are cheap, hotels are cheap (the Sheraton was $70 a night or 2k SPG points), the food is cheap, the beer is cheap. While I do not think participation in a series like this (especially against the Dodgers) will do much long term to build a Padres brand in Mexico, it provides a unique experience to watch their time while discovering new places and new culture.