As most San Diegans know today, #TV8 sports director Kyle Kraska, a well known fixture in San Diego homes for years, was shot in his driveway yesterday.  Most people reacted with horror, disgust and were genuinely worried about the well being of a fellow San Diegan.  I say most, because there are some notable exceptions.  Sitting at work, waiting for the Corey Brocktoberfest at Modern Times to meet up with some fellow Padres internet journalists (bloggers)(my plumber, in Hacksaw-speak), I against better judgement flipped on the Mighty 1090 for Scott and BR.  The Kraska story had just dropped, and Kaplan just seemed to see the story on Twitter.  Let me preface this by saying I don’t go off the topic of Padres very often.  I may go off on something that’s tangentially related to the Padres, like how Padres prospect Rico Noel has advocated and provided helpful tips on how to beat your children and conceal the evidence, and then conversely how “journalist”/shill Bill Center continually whitewashes this fact.  But what I heard yesterday infuriated me enough to write this today.

While you’d assume anyone in media responding to a colleage being shot would be somber, and in the best case, trying to be a professional journalist covering the story of their friend and colleague’s tragedy.  Not the case with ol’ Scotty Kaplan.  Kaplan sounded eerily giddy about the whole thing.  I immediately picked up on a really weird, excited tone from him and Tweeted it out:

Scott Kaplan seems too excited on the radio about the Kraska shooting. It's so uncomfortable.

It was uncomfortable to listen to.  Here, Kyle Kraska is in a hospital about to undergo surgery, and Scott Kaplan is speculating on foul play, commenting on how we “know nothing about his personal life” and thus implying that Kraska got himself into this trouble, noting that he “loved the nightlife”, and then very frequently pointing out that he didn’t like Kyle Kraska:

What's the story with Kaplan and Kraska not getting along that Kaplan mentioned? It may explain Scott Kaplan's uncomfortable overexcitement.

Kaplan says he "had a very small rivalry with Kraska" and didn't care for him. #dickhead

I couldn’t tell if Kaplan was excited because it was a big story that he could play Real Journalist for [poorly] instead of drone on about the Great Friends Stables or talking Chargers draft planning 4 months ahead of time, or if he was excited because a self described “rival” fell into a tragic situation (to clarify, I don’t think Kaplan was happy he was shot, I think he was happy to have this situation fall into his lap thinking he was making “compelling radio”).  It really was just awkward and weird to hear and made me feel very uncomfortable.

To add to it, he obtained the phone number of Kraska’s girlfriend, who after reporting was in tears as she entered the hospital, tried to continually call her for a ‘sclusie interview.  He also tried to cowboy up like he was Wyatt Earp and asked Mike Montana, the shooting suspect, to call in to the show so he could turn himself in to lawman Kaplan:

Cowboy Scott Kaplan says Mike Montana should call in so "he can take him in". Glad we have lawmen like Scott Kaplan.

I wasn’t the only one calling him on this.  He got a bunch of Tweets about how insensitive he was being.  Seemingly more interested in stirring the pot that Channel 8 was showing Judge Judy before their scheduled newscast than expressing a hint of empathy for the plight of his colleague Kyle Kraska. 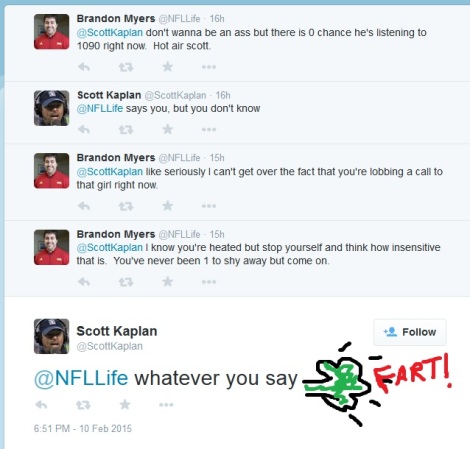 Look at the class of his responses!  He really raises the level of discourse like a pro’s pro!

I’ve long said that Scott Kaplan is a hack radio guy.  Full disclosure, he blocked me on Twitter a couple months ago for drawing an MS Paint masterpiece of him.  I’ve continually pointed out his pointed racism (calling Cameron Maybin a “gorilla” for one).  It’s time that San Diegans started demanding more from the media, and as any listener to San Diego sports talk knows, there is plenty of room for improvement.