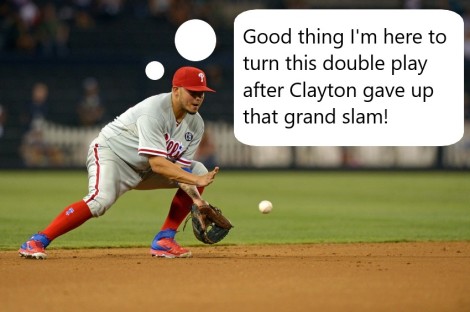 Despite the return of Chase Headley, the Padres just made their first substantial trade of the off season. And, as we all should have expected, it’s a disappointment for a few reasons.

First, Freddy Galvis really isn’t that good. He’s a career 75 wRC+ hitter, and he’s not projected to be much better in 2018. Everyone talks about how he had 20 home runs in 2016, although he only had 12 in 2017, despite the rest of the league basically doubling their previous career home run totals in one season. He doesn’t hit for average (ZiPS projects him to hit around .250), doesn’t get on base (which, to be fair, is to be expected for Padres hitters), and doesn’t have much power, as he never had an OPS above .700 in a season. Basically the only valuable thing he does as a hitter is get doubles, but that’s it, and it’s not nearly enough to make him even an average ML hitter.

Sure, he is good at defense, and since we’ve just suffered through the likes of Alexi Amarista, Alexei Ramirez, Clint Barmes, Erick Aybar, and Yangervis Solarte attempting to play shortstop, it really doesn’t matter too much.

The narrative pushed by the media,

Big winners in all this: Luis Perdomo and Clayton Richard. Finished 1-2 in the NL in ground-ball rate. Both suffered from sub-par infield defense the past two seasons.

is quite uninspiring. It’s quite possible Luis Perdomo isn’t even playing baseball in 2021, and it would be an upset if he’s actually starting for the Padres in meaningful baseball games at that time either. Sure, a good shortstop will make his numbers look better – but it doesn’t mean his value as a pitcher has changed at all, just that the value of a good defensive shortstop goes up when he starts with a groundball-heavy pitcher.

And Clayton Richard? First off, if the Padres front office are making moves based on how they can best help Clayton Richard, they should all be fired immediately. Second, and more importantly, is who cares? Clayton Richard certainly won’t be starting for the Padres in 2021 (and if he is, well, we have much larger things to worry about), and he will probably retire in the next year or two.

One way you can force yourself to care that Perdomo and Richard are getting a defensive shortstop is if you believe that a good infield defense will make the difference between the Padres being competitive or not in 2018. And they won’t, even if we had signed Ohtani, started Headley, and Myers/Renfroe actually became good.

But this goes beyond Galvis not being that good. There are more reasons to be upset about this:

First, his contract ends after 2018. Even if he is better this year, he won’t be in San Diego when we would like him to be producing. And an extension for him doesn’t make sense – most of his value comes from playing SS, and that is Tatis’ job in a year or two. If you move Galvis to 3B, he suddenly becomes very below-average, as league-average 3B hit substantially better than shortstops. Galvis only has value at short, and we need Tatis to play there anyways.

Second, it sucks that we had to give up Enyel De Los Santos. Sure, he’s not the best pitching prospect we have – not even close, really – but he was a 21-year-old keeping his own in AA. He has an explosive fastball, and although his secondaries aren’t quite there yet, he has plenty of time to work it out. A good outcome for De Los Santos is becoming a #4 starter for a few years – and that is much more valuable than one year of Freddy Galvis, especially considering the 2018 Padres season will not hinge on the difference between Galvis and Jose Rondon.

It’s also disconcerting that the Padres are already trading away prospects for major league talent, only about 2 years after the real rebuild began. But that’s a whole other post.

Finally, there are just better options than Galvis. Specifically Zack Cozart, who just signed with the Angels with a 3yr/$38M contract. Not only is this cheap for a 2017 All-Star shortstop with good defense and an above-average bat, but Cozart would have made much more sense for the Padres. Not only would you have him for more than one year, but if you put Cozart at 3B he is still a valuable player due to his bat.

There is one potential not-bad outcome with Galvis, though:

There's an outside, but not terrible, chance that Galvis could reject a qualifying offer next offseason. If he has a good year, he could bring you back a comp pick, too.

But it’s not a good enough reason (or chance) to justify a move.

The Padres really don’t need to try to be competitive this year. But, apparently, Galvis is the man to lead the infield to attempt to win 80 games in 2018.

One response to “The Freddy Galvis deal is sad, and you should feel sad too.”