In the midst of a disappointing offseason where the Padres seem poised to stand their ground, push the goalposts for even the low bar of contention back another year, and have Pete and Ron roll around on all the profits they’ve managed to take in for six years with no one raising an eyebrow, there hasn’t been much to cheer about.  One notable positive is the Padres marketing team, well known for a constant barrage of embarrassing, lead story on Deadspin caliber blunders hasn’t totally screwed anything up yet.  The “Days Since Last Massive Embarrassing Marketing Blunder That Blows Up Nationally” sign hanging at Petco Park may be at a record number of days right now.  Well, I opened my email today and was met with the Padres latest abhorrent marketing scheme.  For people that know me, this is a marketing scheme that particularly struck a nerve because it screws around with people’s personal finances in the name of SPORTSBALL FANDOM.

We’ve written about Compadres Points here at Gwynntelligence before.  Many of the same issues written about in that post from 2014 are still existing for customers, along with many other negative issues with the program.  These points programs aren’t easy to maintain.  The corporation sponsoring them is basically creating an entire economy complete with inflationary and deflationary pressures.  Airlines have teams of Ivy League educated economists to manage their points and miles programs; it’s not necessarily that different from working for the Federal Reserve and working to manage the US Dollar.  Of course, in the Padres’ case, they have a non-college educated Chief Marketing Officer at the head of the Compadres economy.  This is why it’s particularly alarming that the Padres are issuing a new product that pegs the value of Compadres Fan Rewards points to real, fiat currency through a new Visa card issued by UMB Financial.

Here are the basics: 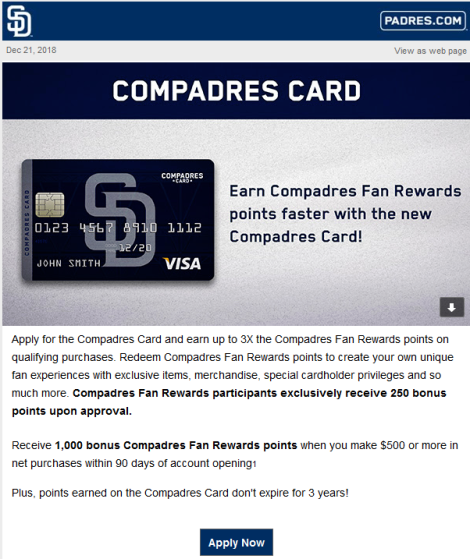 Sign up bonuses are common in the credit card game.  I generally at all times am working towards hitting a sign up bonus on a credit card before I move onto another credit card sign up bonus.  In this case, UMB and the Padres are offering a total of 1,250 Compadres Rewards points after you spend $500.  As a point of comparison, I generally will not sign up for a card unless I can extract $500 in value out of the sign up bonus, but usually look to get $750-1000 per bonus.  So what are 1,250 Compadres Rewards points worth?  If you’re not familiar with Compadres points, you can generally redeem them for Padres knick-knacks, leftover giveaway items, occasionally they will have auctions for items like Andy Green autographed baseballs, and during the season, they will have auctions for experiences like visiting the FSSD studios or hitting in the batting cage behind the Lexus Club.  First, here’s the current pricing on some merchandise you can redeem for: 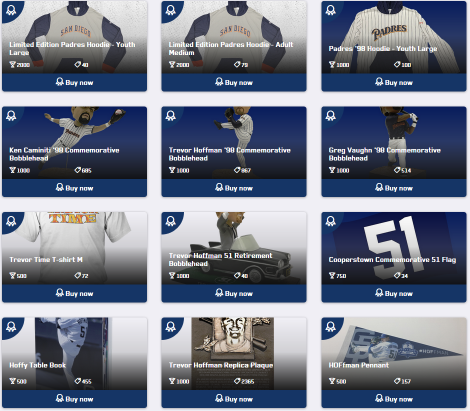 In this scenario, you could use your 1,250 points to buy one bobblehead, or a flag and a pennant or book.  You do not have enough points to get the 2,000 point leftover Cory Spangenberg marketed “hoodies”.  Is there any kind of “cash value” for Compadres Rewards points?  Short answer is no, but for comparison’s sake, the Padres have had a few offers in the Compadres redemption market that we can use.

The Jumbo Jack voucher isn’t actually free, it’s a coupon only eligible if you buy a drink.  Let’s assume it’s just a free burger though; Jumbo Jack’s list price are $2.59.  This means that at a cost of 150 Compadres points, each point has a rough value of 1.7 cents.  The Del Mar racing ticket voucher has a list price of $6.00, meaning that at a cost of 350 Compadres points, it values the points at about 1.7 cents as well.  So let’s run with that value.  That puts the value of the sign-up bonus for the Compadres Visa card at about $21.25.  That’s right, when I churn through credit cards, I’m looking at getting anywhere between $500 and a $1,000 in value from a sign up bonus, in the Padres’ case, apparently $21.25 is just fine for their valued customers.

On the sign up end, this is undoubtedly a terrible offer. But in the world of rewards credit cards, there are cards you get for the bonus and there are cards you get to keep and spend on. Generally the baseline is that if you can’t get more than 2% in value out of a card, you should just get a basic Costco 2% cashback credit card. With travel rewards, you can see anywhere from 4-10% in value back, depending on your skill in redeeming. Here, given the cash equivalent values we found above, the Padres Compadres Visa would return you 1.7% in value back on every general dollar you spend on the card. This on face is not terrible, but it’s not great, given that it’s easy to find a 2% no fee cashback card. The real kicker here is that all of those Compadre reward points aren’t good for anything really that great. You can’t redeem them for cash, you can’t redeem them for gift cards, you can’t even redeem them for Padres tickets. You’re stuck redeeming them for leftover giveaway items, a small chance at an auction win, or dollar store caliber junk, and nothing else.

You know how I said airlines, hotels, and credit card companies employ doctorate level economists to manage their points economy?  Yeah, the Padres don’t have that.  They have a CMO that doesn’t have a college degree managing the program and it shows.  There have already been issues with inflation on the redemption side.  Hoodies have varied in price from 250 points a few years ago up to this season’s 2,000 point price.  Meanwhile, the earn side has stayed relatively the same.  I’ve heard complaints from season ticketholders that as the season nears the end, the auctions, which are really the only valuable redemptions for Compadres points, get ridiculously competitive and prices skyrocket as people are desperate to use their points before the season ends and they lose them.  This is usually paired with the Padres not offering enough redemptions to allow the points they’ve issued that season to be fully expended.  So the status quo balance of earn/redemption isn’t great.  Now they are infusing the market with an entirely new source of points: the sign-up bonuses and credit card spend related points.  This will throw the economy even more out of whack and lead to inflation unless the Padres drastically increase the number of redemptions (proportionate with the number of Compadres points they end up selling to UMB Bank for their cardholders).  It will almost definitely make actual season ticketholders’ points less valuable and more difficult to redeem for rewards.  Let’s just say I don’t trust Wayne Partello to manage this economy like Alan Greenspan.

This brings me to my final issue with this credit card.  It preys on people’s fandom and loyalty to the baseball team in a crass effort to make a quick buck for the team, while being detrimental to those fans’ personal finances.  In every possible way, the average person getting this card would be better off with a basic no-fee 2% cashback credit card, if not a high quality travel reward card.  Locking your earn from spending into a poorly managed pseudo-currency with no way to convert it to a cash equivalent is just dumb.  And it pains me to think how there are fans out there that will get this card just because it has the Padres logo on it, to their own detriment.  If there’s one thing I take seriously, it’s protecting people’s personal finances from charlatans and flim-flam men.  I beg of my readers, just don’t get this card.  It’s not in your best interests, it’s not in the Compadres Rewards Program’s best interests.  The only one that gains here is the Padres selling as many Compadres Rewards Points to UMB Bank as they can push out the door before they devalue the points yet again.