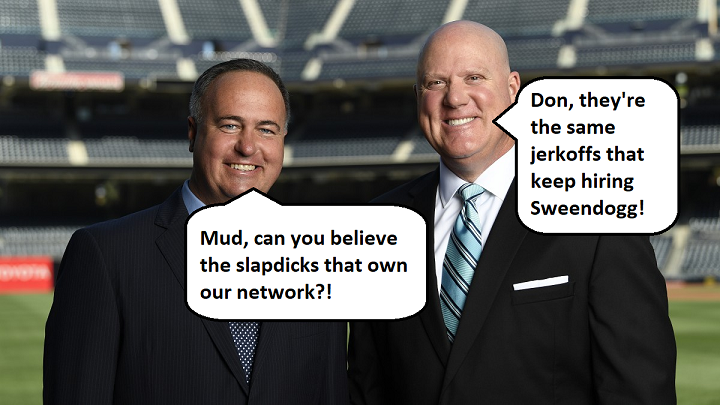 Here we are on the precipice of the most anticipated Padres season in maybe ever. No longer do we have to pretend to be excited for Brad Hawpe or Vinny Castilla to find the fountain of youth along with a hundred other things that have to go right for the team to be competitive. The 2021 Padres are fielding a World Series caliber payroll and a World Series caliber team and the fans have taken notice. As Spring Training games start, that elation has been deflated as fans discovered that the Padres were only having ten games televised on the network that the team is a co-owner of with Sinclair Broadcasting. They actually have three LESS games televised than last season’s Spring Training. Not that this matters for a vast swath of the team’s fanbase that no longer pays Spectrum or Cox for cable service. Thanks to the Padres and Sinclair demanding higher carriage fees for Fox Sports San Diego, FSSD is no longer carried by YouTube TV, Sling, Hulu, or Fubo. Thanks to MLB’s incredible foresight, their own streaming product, MLB.TV, blacks out games in local markets so San Diego County fans can’t even fork over the $130 a season to watch their beloved Padres. While there is some hope the parties come to an agreement by the time Opening Day comes around, the U-T decided to throw water on this idea today. Bryce Miller (possibly/probably backed by nothing but speculation) stated “games this season are not likely to be available through YouTube TV, Hulu, Fubo and Sling TV”. His editor, Jay Posner, followed this up with his assessment on whether there would be an agreement: “Would love to be wrong but I would not expect that to happen based on everything I’ve read.” So where does that leave us? It leaves us in a position to start getting creative. Let’s take a look at what our options are and how much they cost.

Option 1: Crawl Back To The Cable Company

lol no. There’s a reason I quit cable in the first place. It costs too much, you have to pay for a box on each TV, and the companies themselves are hatable. Also, since I have standalone internet with the cable company, I’m not considered a new customer to get those sweet introductory deals. In fact, after talking to Spectrum, I’d have to cancel internet for 30 days to regain new customer status.

Cost: To upgrade to Spectrum Select cable (the minimum level that includes FSSD), including one DVR HD cable box (every additional TV is another $8 per month), and not including unspecified “taxes and fees”, it would cost $75 per month. We have a total of 5 TVs streaming YouTube TV right now, so realistically it would cost much more to cover the additional cable boxes.

When the “free” market refuses to offer a product that meets their customer’s requirements, sometimes the customer has to try and find a solution in the gray area. Basically every televised sporting event is generally available for free, in HD, via streams posted to Reddit or streaming websites. Just take a gander at Reddit’s MLBstreams subreddit. Every game is posted there and is a click away. There are also sites like FirstRow Sports and Sportshd.me that offer a mindblowing number of streams. The downside is streams can sometimes be unreliable, and sometimes you’ll deal with pop-ups. For me, the other major downside is I want an as close to cable experience as possible. I want to be able to sit on the couch, and navigate to the game with a remote control. I don’t want to have a laptop or tablet connected to a TV to stream something, and AirPlaying off an iPad is a pain for me. I also have an Apple TV that makes it harder to install something like Kodi to access streams via the streaming box/stick. If you are fine with connecting a tablet or computer via HDMI or Airplay/Chromecast, this is by far the cheapest option. In a way, I really like this option because it shows Rob Manfred, Sinclair Broadcasting, and the Padres, that their greed isn’t going to be just be accepted by us, we will find legally questionable options that are both cheaper, and arguably higher quality of streams, to fill in the gap left by their bad decisions.

Speaking of legally questionable options, Hehestreams is a service that has been around for a few years. Hehe basically packages up streams into a subscription package with a lean user interface and dependable streams, all with no blackouts. They have some unofficial apps for Roku and Amazon Fire TV, and integrates with Kodi. Unfortunately, the only way to get it on Apple TV is to jailbreak it. Hehe seems to be a low effort way to get Padres games on a TV, assuming you are operating Roku or Amazon systems. As a service, it’s been pretty highly regarded in the Reddit community, and appears to offer good support.

Cost: For the full MLB season, Hehe is charging $100, or you can opt for $16.99 per month. I do know they are offering $10 off the season through this link they gave the Padres Hot Tub podcast, lowering the cost to $90 for the season.

This method sounds like the most technically difficult method, but it’s actually pretty simple. To bypass MLB.TV blackouts, you can subscribe to a DNS service that will mask your IP address and spoof your location so MLB.TV won’t know you are sited in San Diego County. There are two main products that I’ve looked into: Unlocator and YonderTV. To use these services, you just have to go into your streaming device’s setting and update the DNS to the address provided by the service. That’s it. It’s elegant and easy. The problem is you’re looking at two bills for this method to work: gotta pay for MLB.TV and then gotta pay Unlocator/YonderTV’s fee. If you are a T-Mobile customer, you are probably getting free MLB.TV offered at the end of March, but you’ll miss Spring Training. If you are a Padres season ticketholder, you receive free MLB.TV as well.

Let’s take a quick aside here, this may save you $40 if you are paying for MLB.TV. MLB offers something called the MLB Home Run Fan Membership for $25. This includes a variety of discounts, but most germaine to this discussion is a 50% discount on MLB.TV, lowering the cost to $65. With the $25 membership fee, you’re all in for $90, $40 less than the listed price.

Cost: OK, so you’re in for $90 already for MLB.TV. Unlocator is $5 per month. YonderTV is $3.33 per month, or $30 for a year. As far as I can tell, there is no discernible difference beteween the services. So let’s just use YonderTV since it’s cheaper and named after our beloved Padre 4 Lyfe and fedora enthusiast Yonder Alonso, you’d get MLB.TV and 7 months of YonderTV for $113.31.

AT&T offers a full TV streaming package, similar to YouTube TV. Their base “Entertainment” package includes FSSD. Since this is a full featured streaming package, other factors may go into your calculation depending on what channels you care about. The “Entertainment” package does not have as many channels as YouTube TV but costs more. Depending on your needs, and if you already pay for YouTube TV/Hulu/Fubo/Sling and are willing to change services, this may work for you.

Cost: The “Entertainment” package costs $70 per month plus taxes/fees so let’s call it $75 per month.

So what am I, the YouTube TV subscriber, going to do? I am leaning heavily towards the MLB.TV/DNS service option. This provides me a seamless option that will integrate into my Apple TV and Roku TVs at my house, and I can easily access MLB.TV on my phone or tablet if needed. If Hehe had a native Apple TV app, I’d go with it, but it doesn’t. If I had all Roku TVs, I’d choose Hehe though. If I was short on cash, I’d just deal with getting free streams sent to the TV.

This entire exercise is an interesting statement that I hope Sinclair and the Padres take notice of. If they are going to dick around with carriage fees, the customers aren’t going to sit around on their thumbs while corporate monoliths squabble. We’re going to find another option, and unfortunately for FSSD, most of those options involve methods that limit or eliminate their revenue, which is of course no skin off my or your back. And once consumers find out these options exist, get used to using them, put them through a season long trial, and realize how much money they’re saving, FSSD may be looking at permanent change in consumer behaviors to their detriment.