During the Padres awesome winning streak, I found myself glued to the TV and to my seat at Petco Park, and totally blew off drawing dongs in MS Paint.  Luckily, I’ve found time to craft this gem of stupid, hated, overrated, ESPN darling (I consider this an insult) Yasiel Puig.  More importantly, as the Padres open a key series against the awful Dodgers, they send staff ace Jason Marquis to the mound to “mow down” the Doyers lineup with some 86 mph heat.  I’ll be crushing brews and sitting politely in Section 305 tonight.
The Padres Jagoff twitter had a few milestones this week.  It has moved ahead of the Pals Podcast twitter with a whopping 34 followers.  A tweet was actually responded to by Tom Garfinkel (requesting less Smashmouth and more Third Eye Blind at retro night).  Almost 50% of the Padres Public crew is following us on Twitter now (I figure it will only be another 19 months until we get to the 75% figure).  Got two items into the Padres Public Matt Vasgersian chat, although I don’t think he understood my tri-tip/Santa Maria wordplay.  And landed a ticket to Padres Social Media Night on July 9 to hold court and kiss up to Padres Public to add the blog to their circle of blog royalty.  Quite a week.
I also got into a Twitter debate with the Friarhood during some particularly slow innings of Padres baseball last week regarding who needed to be extended on the Padres.  The obvious one is Jedd Gyorko, some would argue Kyle Blanks if he keeps it up.  I believe Everth Cabrera is a high priority.  Not only are competent shortstops hard to find, especially for the Padres (remember Deivi Cruz) (how about Ramon Vazquez) (don’t forget Rey Ordonez), but Everth is better than your average shortstop.  His gains this year have been primarily getting on base more and fielding better.  I believe his improved patience is a learned skill that will be less affected by performance fluctuations.  If he can get on base, he can steal bases, and add value on the basepaths.  As a Super 2, his price will be going up.  We may as well lock him in for a few extension years and solidify the position.  The system doesn’t have many great prospects at the position.  Jace Peterson is a wild card that is years away from making the bigs.  Friarhood pointed out his decidedly mediocre years prior, but I honestly believe his time in the minors helped him develop the patience and the on-base skills he is showing this year.
And now the Yasiel Puig dong MS Paint picture: 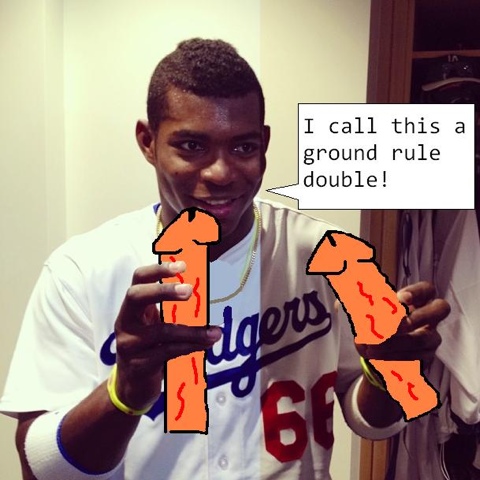