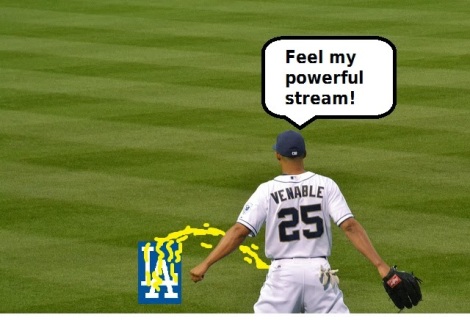 When I was living on the East Coast for a decade, I became so desperate for Padres baseball that I started Alta Vista-ing some of those newfangled weblogs that were marginally covering the Padres.  Over time, blogs started maturing, gaining followings, and finally, last season, really getting the attention of the team.  I still remember how excited I got when I discovered Gaslamp Ball and could watch the Rally Unicorn (TM) do it’s magic to help the Padres win, when I found The Sacrifice Bunt and could read Melvin’s in depth articles on Padres statistical minutiae, or when I found Geoff Young’s writing on mid 90’s Padres obscure players and Steve Poltz (which convinced me to buy each version of the Ducksnorts Annual).  Basically, I could watch Baseball Tonight for an hour and catch 15 seconds of Padres highlights in the last 2 minutes of the broadcast, or I could start reading Padres blogs.

Anyways, it’s a totally different world now.  Blogs are pulling in many thousands of readers a day, or in the case of Padres Jagoff, many ones of readers a day.  Gaslamp Ball is part of the ubiquitous big business of SB Nation, Friarhood is producing and selling a number of awesome shirts to go along with in depth coverage, and a collection of smaller Padres blogs entered into a joint venture that resulted in Padres Public.  Seriously, who could have guessed that mergers and acquisitions plus joint ventures would be a part of the Padres blogosphere.  The Padres had always thrown a few bones to the larger blogs, maybe at least acknowledging they existed and occasionally granting some short interviews.  Tom Garfinkel did a great job of at least trying the social media thing, occasionally tossing out some seat upgrades via the Tweeter.  But last season, it seemed like Garfinkel’s last hurrah was to really try and embrace the bloggers.  The team and their new TV partner, Fox Sports San Diego, really started pushing the social media thing.  Whether this was an initiative created by Garfinkel and his office, or from some lame consultants that told the Padres they needed to embrace the hot new buzzwords like social media, at least it happened.

While much of the Padres social media initiative involved either Padres Public and Gaslamp Ball, it was nice to see the blogging community recognized.  In Spring Training, FSSD had a handful of bloggers provide color commentary (Mike Dee, I will literally fellate you if you select me for this this season.  AND SWALLOW) for an inning at a game.  FSSD also started featuring Social Media Tuesday which basically just involved a lame Twitter poll and a couple Tweets shown at the end of the game.  The Padres Social Media Night has been an annual occurrence, and 2013’s was fantastic, offering many of us the last chance to meet the great Jerry Coleman before his sad passing.

In addition to the Padres’ efforts, I think many of the blogs have done such a great job that the bloggers, for me, are almost as famous as the players on the field.  When I’m walking the Petco corridors and run into Jbox, Rick from RJ’s Fro or Sac Bunt Melvin, I feel like I should pull out a baseball and get their autographs.  God knows what I’d do if I ever met Dex.  Meeting Dex would be like the equivalent of pulling a super rare, limited edition hand signed baseball card out of a pack.  THAT’S SCARCE!  Padres Public’s Padres and Pints has brought in local TV celebs and made the Padres Public dudes into multimedia stars (invite me on!  I like binge drinking and Padres!).

Looking at 2014, I expect more of the same.  The only question is if the Mike Dee regime will value the bloggers as much as Tom Garfinkel.  So far, I haven’t seen any evidence of outreach other than converting the terrible suite off the Padres store that rarely got bought into a Social Media Lounge for FSSD.  The big question is if Mike Dee sees value in reaching out to the blogs, although I will note that he has already responded to two Padres Jagoff tweets.  HE KNOWS I EXIST!  Garfinkel pretty much ignored everything I sent to him, even legitimate season ticket holder issues (except for the time I tweeted that the 1998 Reunion Night game could use more Third Eye Blind – he agreed and then didn’t put on any Third Eye Blind).

Thanks to my 3 week old baby girl, I had to skip out of Padres Fanfest before the partying began, but I heard the Friarhood and Padres Public meetups were awesome.  Luckily, with my plan to drag the girl to a ton of games this year, I’ll be able to crush some Sculpins at Petco with an Ergobaby on and hopefully meet up with some of the blog superstars.  Here’s my look at the current 2014 Padres Blogger Power Rankings:

1.  Gaslamp Ball – It’s tough to beat the 500 lb. behemoth.  They’ve got the backing of the largest sports blog network, a collection of writers across the country, and like 10 years of history.  Plus who doesn’t enjoy thethingwynn’s Padres
baseball card coverage.

2.  Padres Public – Combining the various niche Padres bloggers into one SUPER BLOG (similar to 80’s SUPER BAND Asia) was genius.  The Padres slurped this up and made Padres Public the darling of their social media marketing efforts.

3.  Friarhood – Steve Adler has put out some awesome clothing that I see all over Petco.  I’d consider rating the Friarhood higher, but his articles don’t show up on my iPhone.  They don’t format for mobile and I don’t feel like zooming in on my phone and panning the screen for every line.  What I’ve seen is great, but I just don’t read articles on my computer that often.