Since I have nothing to do during the day except tend to yellow poop in diapers and bounce a baby around like a Bop It, I got the chance to watch MLB Networks top plays of 2013.  First off, it was a travesty that Will Venable’s diving catch in CF didn’t make it above #25.  Second, it was disheartening to see possible NEW CLOSER Joaquin Benoit giving up the David Ortiz grand slam in the ALCS as the #1 play of the year (of course it was, it involved the Red Sox – this show was quickly followed by stupid Red Sox jerk Kevin Millar on Intentional Talk).  But the real treat was seeing the “other plays that didn’t make the cut” segment that featured none other than Padres star for life, Pedro Ciriaco!  Pedro is a Padre that will go down in history for both the Twitter puns and for being as exciting to watch as Deivi Cruz was.  THAT’S EXCITING!

Anyways, MLB totally sucked off Yasiel Puig like they usually do and featured his somewhat impressive throwing arm.  This reminded me how much I hate Yasiel Puig.  With those fires burning, I had to take to MS Paint to produce this NEW CONTENT. 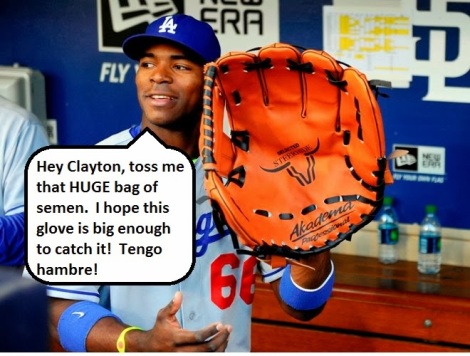 I also learned yesterday that nobody cares about my mediocre quality long form Padres analysis.  My Chase Headley post had a whopping 6 views as of now.  My picture of Clayton Kershaw om-noming on a MS Paint peen got 56.  Do the math business wizards.