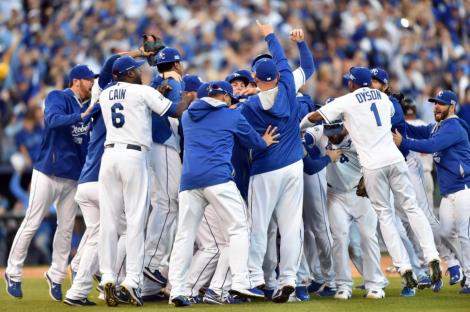 (Nevermind the fact that none of those teams have actually ever truly been successful – 0 combined titles – under their current regimes, or that small market teams haven’t won a World Series since the 1991 Twins or the 1990 Reds, depending on the inclusiveness of your definition of “small market”.)

This, of course, means that Padres fans will now likely spend the next few years justifying free agent inactivity and being irrationally optimistic in Spring Training under the guise that the “Padres could make it to the World Series…just look at the Royals!”.

Okay then, let’s look at the Royals. Despite a similar opening day payroll in 2015 and a few other traits they shared with the Padres – scarce power and a sharp bullpen – let me explain as succinctly as possible why the Padres are not the Royals.

The Royals actually built their team on defense: Alex Gordon, Alcides Escobar, Lorenzo Cain, and Salvador Perez are all great defenders, while several other starters rank at least average. The Padres just say that’s what they want to do: they dealt their best defender, actually thought trying Carlos Quentin in the National League was a good decision, are playing a third baseman at second base, and will probably go into 2015 with Alexi Amarista as their starting shortstop. By the metrics, the Royals were Major League leaders in defensive WAR and second in Ultimate Zone Rating. The Padres were 12th and 19th, respectively.

The Royals built an effective bullpen internally, with Scott Downs being the one (relatively inexpensive) exception. The Padres disproportionately invested in their bullpen, paying Huston Street and Joaquin Benoit just north of $13 million combined. While both strategies succeeded in their immediate aims – the Padres and Royals were ranked first and second in baseball at preserving late leads – the Royals edition freed up payroll for other needs.

The Royals struck out less frequently than every other team in baseball, striking out just 16.3% of the time. The Padres were towards the bottom of the league, striking out 21.9% of the time. While the Royals and Padres had similarly meager power totals – .115 ISO versus .113 ISO – the Royals meager lineup stole 153 bases compared to the Padres’ 91.

The Royals have had one of the more consistent front offices in Major League Baseball. Through thick and thin, Dayton Moore has been the general manager since June 2006. The Padres have gone through Kevin Towers, Jed Hoyer, Josh Byrnes, and a few interim GMs since June 2006, and now hand the reigns off to yet another newcomer. Nevermind ownership changing hands, team president firings, and numerous other high profile overhauls since 2006; the recent scouting changes are the latest in this regard.

The Royals’ management stuck with Eric Hosmer through his struggles, and played Moustakas through his struggles, too – either in AAA or at the MLB level. The Padres panicked on Anthony Rizzo’s swing in fairly recent history based on a few months as a 22 year old, platooned their latest big September call-up (Rymer Liriano), and chose to play a journeyman catcher (Rene Rivera) instead of allowing the crown jewel of the Mat Latos trade (Yasmani Grandal) to play consistently.

Speaking of platoons, Padres management appears content trotting out platoons each and every season. Whether that’s a strict lefty-righty platoon in a corner outfield spot, a catcher or first-base rotation, or a platoon aimed at giving a wounded player consistent time off, believe me…the Padres have tried it. The Royals gave at least 500 plate appearances to all nine of their starting position players in 2014.

The Royals made a concerted effort to win in the past few seasons. They didn’t deal their expiring contracts, like Billy Butler, James Shields, or Noriaki Aoki, and were bold in acquiring James Shields to begin with. They even spent $30+ million on a middle infielder in free agency, Omar Infante, and spent another $32 million on a mid-rotation arm in Jason Vargas. That was on the heels of paying Jeremy Guthrie and Ervin Santana. The Padres limp into the 2014/15 offseason with Joaquin Benoit’s contract as the largest they’ve ever awarded a new player in free agency, and are content with recycling replacement level talent: Jason Marquis, Eric Stults, Alexi Amarista, and so forth.