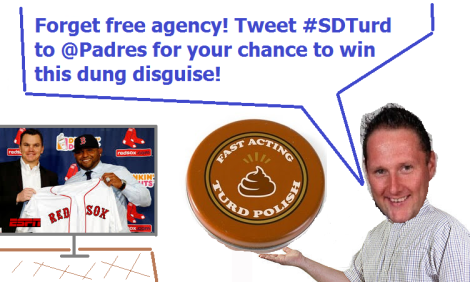 Giving a new meaning to #BringBackTheBrown

On Wednesday I was linked to perhaps my favorite story of the entire Padres offseason. The tweet, shown below, links to a speaker/lecture list at an upcoming conference:

On March 2nd and 3rd of 2015, the 2nd Annual Sports Fan Engagement Forum is set to take place in Kansas City. A large swath of front office executives from major professional and collegiate sports teams are scheduled to speak on a pretty wide range of topics related to fan engagement: reaching the female demographic, how to use Facebook, developing young fans into season ticket holders, and so on.

Almost every lecture at the forum is slanted toward further fan engagement, with one glaring exception that can only be classified as “damage control”. Any guesses on whose lecture that will be?

If you guessed the Padres Chief Marketing Officer, Wayne Partello, you placed the needle right on the album!

While I don’t blame Wayne for giving the lecture, or performing his job, it absolutely is egg on the Padres’ face. ‘Cause, and I’m not even making this up, Wayne Partello’s lecture is actually titled “Win Or Lose: Engaging Fans Despite Inconsistencies In Team Performance”.

It’s somehow even more depressing than it seems on the surface, too. Emphatically so. Here’s the full lecture description:

Every sports organization will experience peaks and valleys based on a team’s performance, compelling marketing professionals to capitalize on team wins while also creatively engaging fans despite frustrations derived from on-the-field outcomes. Finding consistency in fan engagement requires careful maneuvering of digital conversations and team-generated content by limiting the opportunities for fans to be negative on social media sites and pointing them toward optimistic initiatives such as contests and promotions. Selling tickets for a winning team is certainly easy and an obvious strategy for sports organizations, but building excitement when team performance is lackluster demands creative messaging and selling of the overall fan experience.

Limit the negativity with bells and whistles

The Padres actually have a coherent plan in place, from Chief Marketing Officer on down, on how to deal with negativity on social media sites. A plan which basically boils down to “Hey you over there! Stop looking the other direction! Tweet out this contest hashtag and get a ticket we couldn’t sell anyway!”.

Not only is this fairly insolent to Padres fans, but it’s a ridiculously defeatist approach by the team.  Rather than provide fans with legitimate means to be positive, they seem to be content offering half-ass attempts at temporary reconciliation.

It’s probably not a coincidence that in the same week that Yasmany Tomas signed in Arizona and the Padres dealt with all the snark from bringing in a new batting coach, instead of a new bat, they introduced two new contests via social media:

#ReplyToApply with why you want to attend #SDHolidayWonderland and you & a guest can attend VIP Night this Thursday! pic.twitter.com/BSH5jeQ7Tq

Want to win a prize from a #Padres legend? You could win a gift from a #SecretPadre just by tweeting the hashtag. pic.twitter.com/5ZL5co963n

Oh, sweet, Padres! Thanks! Instead of actually getting the gift of an actual Padres player that can hit the baseball, I get a very small chance of winning a mystery trinket from a Padres legend!

Which begs the question: which legend? It can’t be either of the Padres top two legends – Jerry Coleman or Tony Gwynn – but maybe it could be some other legend like Adrian Gonzalez, Jake Peavy, Bruce Bochy, or Fred McGriff. Wait a second…

While none of this can be considered sinister, is it really so damn much to ask for legitimate reasons to be excited about Padres baseball, not contrived contests specifically designed to test fans’ attention spans?

“Capitalize on a storied history, team pride and traditions”?!?

What in the world are you going to say here, Wayne? That the Padres have embraced their team history? You can’t truly be serious.

Your Padres just let the Fox broadcast team encroach on the Tony Gwynn Statue for years. (Recall, a poll of Padres fans at Gaslampball revealed that 94% of people thought the broadcast should be moved.) The set remained how it was, encroaching on Tony’s statue, until his death forced their hand.

The Padres seem completely hellbent on avoiding a color scheme change to brown, including a complete unwillingness to reveal their “research” method to inquiring media members:

When I emailed Ron Fowler asking if I could see the research he cited in not bringing back the brown, he said, "No, you may not." #Padres.

The plaques at Monuments Park are inaccessible to the public. And, in the process of making them accessible, YOU NAMED IT THE BUD FUCKING SELIG PLAZA, which the team president followed up by metaphorically spitting in the face of fans (and prominent news commentators) who questioned the prudence of that decision. News flash: that was revisionist history and embarrassing to team pride.

Although – gotta give credit where it’s due – revisionist history and embarrassments certainly are a tradition with the Padres these days. Maybe just change that part of the lecture to “traditions” and leave the conference before they ask you to resolve your bar tab. Wouldn’t get much more Padres tradition than that.

What it means for the Padres

Does purposefully employing someone with this expertise mean that, overall, the Padres are losing the philosophical battle on payroll, roster construction, and general frugality? I don’t know. But at the very least, they’re clearly admitting that such a battle exists in the public eye and that it’s worth the effort to subdue.

The overall meaning of Wayne Partello giving this lecture is pretty simple: the Padres have bred or chose to hire a Chief Marketing Officer who has become the industry expert in distracting fans from the team’s negative performance.

That and that the Padres don’t give any shits that everyone knows that their team, up through at least their Chief Marketing Officer, is actively engaged in blatantly distracting fans from reacting negatively, and in training those same fans to be excited “despite team performance”. Although, I guess you could just reason that the Padres shouldn’t just give shits away when they already have someone on payroll who can polish that thing to a nice shine.

6 responses to “The Padres are breeding expert turd polishers, purposefully”