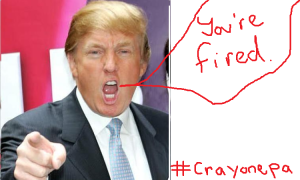 This isn’t because of his consistent incoherent ramblings, like this one from Tuesday: 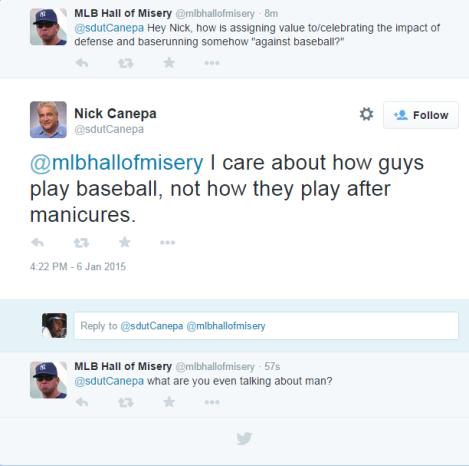 It’s also not because he’s a washed-up writer, though he certainly is.

The UT should fire him for both those reasons and because anyone else can write exactly like Nick Canepa. In fact, I am so confident that I can write carbon copies of what Nick Canepa is likely to put out there, that I’m willing to actually do it for a fraction of the cost.

Here’s my official proposal to the Union Tribune:

That’s right, Union Tribune: you can actually keep “Nick Canepa” while pocketing two-thirds of his salary!

How To Nick Canepa

Nick Canepa-ing is far easier than you imagine it is. Watch.

I want you to think about a topic in sports…any topic. Now, imagine that you were just in a coma since the mid-70s and have awoken in a hospital bed with that sports topic being discussed on the television in your room. What is your very first thought? Harness that thought and write it on a piece of paper. That’s Nick Canepa-ing. You did it!

If you struggled, don’t worry. I’ve actually made it even easier for you to Canepa.

“Johnson, one of the all-time lefties and a four-time Cy Young winner, received 97.3 percent of the votes. The Big Unit. Total domination.” – from Hall of Fame Voters Hard To Figure

“Basketball uses it. Not that much. And that’s fine.” – from Time to end baseball replay experiment

So what now? A lot of outfielders here. Too many. What of always-injured Carlos Quentin? Can he be dealt, perhaps to become a DH? Can’t see him remaining. Cameron Maybin either.

Upton gets $14.5 million next year and then becomes a free agent. He looks like a rental. But that’s all right.” – from Padres GM Preller Daring to be Great

“He’s the Padres’ rock. Bochy is always there. He’s the constant. And he’s admired. Admired by his players, admired by his peers.” – from Bochy one of the good skippers

For example, the managers:

“Bruce Bochy is all right. There are a lot of people out there who don’t think so. I hear from them regularly and will hear from them again. But Bochy is OK, or he wouldn’t be here in charge of his 12th spring training.” – from Bochy one of the good skippers

“If you want to blame Bud Black, go ahead. But he’s not just a good guy. He’s a good manager.” – from Black has done well with what he’s got.

“Josh Byrnes deserves a hand for not showing his hand.

“The more you do this,” he says, “a lot of times you do your best work by doing nothing. I’m glad I did nothing.”

Looks like being smart may be back in vogue at Petco Park.” – from Canepa: Padres appear headed in right direction

“You must dare to be great. A.J. is daring.” – from Padres GM Preller Daring to be Great

“For what money I have, Towers is the best GM in baseball.” – from Moorad goofed when he fired GM Towers, hired Hoyer

along with the team presidents:

“It wasn’t long ago, but it seems like generations since the Padres had so much on the baseball. Larry Lucchino, the genius, was in charge of a young think tank” – from Mike Dee the right man to lead the Padres

“The new group already has said it intends to keep club president Tom Garfinkel and General Manager Josh Byrnes — which means, if nothing else, it has some smarts (and will look even smarter if it quickly stands behind manager Bud Black).” – from Canepa: Padres appear headed in right direction

“Alderson, an astute baseball man, watched Bochy carefully after Alderson joined the team last year with the season in progress.” – from Bochy one of the good skippers

“Dee is a good guy. Laughs a lot. His motor never shuts off. And my guess is that if anyone can help turn this franchise into a more fan-friendly winner, it’s Dee.” – from Mike Dee the right man to lead the Padres

and, of course, the owners:

“Smart and accessible, with feet firmly planted, Moorad appears far less mysterious than his majority partner.” – from Moorad clearly knows what he wants in GM pedigree

He owned a ballclub for 17 years, but he left dog-ears on many pages of this city’s history book.” – from Moores deserves credit.

“But if I were Ron Fowler, a man of honor and respect who is running this franchise” – from Padres should cut ties with Grandal

“But Harvey does not like the digital direction baseball has pointed to. And I can’t say I blame him. Baseball is a game that rewards those who fail the least, and that includes umpires. Replay removes the human touch.” – from ‘God:’ ‘They are ruining baseball’

“For baseball to be baseball, there has to be something wrong that can’t be corrected.” – from Time to end baseball replay experiment

or the designated hitter:

“The DH is the worst thing to happen to baseball, always the idyllic, Norman Rockwell sport.” – from Designated hitter is still baseball’s biggest abomination.

or banning collisions at home plate:

“What? Does MLB order runners not to touch the catcher, try not to jar the ball loose, as Cousins did? Let’s not get stupid.” – from One bad break doesn’t mean baseball should change its rules.

He even manages to hate the (off-topic) new NFL overtime rules, which are widely praised:

“The NFL often changes rules it should leave be. This one should have been left alone in the first place. You’re never going to please everyone with overtime regulations, but the quicker they end, the more TV networks like it.” – from Don’t change overtime rule for Manning.

“Pablo Sandoval – For taking your 106 career home runs to Fenway.” – from Reasons Nick Canepa is Thankful in 2014

“Zebras – For proving high-profile, well-paying jobs exist in sports for those with impaired eyesight.” – from Reasons Nick Canepa is Thankful in 2014

“Trade rumors involving Adrian Gonzalez have been going on so long it seems the Pilgrims brought them over in the hold of the Mayflower.” – from Gonzalez a goner? Only if you buy into rumors

“If Hundley can’t rebound and the rotation can’t hang on early, this season could be longer than Yao Ming’s inseam.” – from Padres batteries a bit low

“Baseball was born around 2,000 years too late for miracles. Maybe it can’t squeeze wine out of a rosin bag or make loaves out of a catcher’s mitt, but every so often the unexplained happens.” – from New blood can’t hurt if club’s this bad.

“Gambling on their own sports tears at their fabric of integrity. It’s the biggest no-no.” followed by “I’ll vote for him. Avowed racist Ty Cobb’s in the Hall of Fame, and if you think Rose is a worse person than Cobb, you haven’t gotten to the “C” chapter of the “Worst Guy” book.” – from Time to Lift Pete Rose’s Lifetime Ban

“The outcome from their piles of Dominican pesos? Nothing.” followed by “The Padres have one top Dominican prospect, 22-year-old outfielder Rymer Liriano.” – from Padres’ Dominican Foray a Bust So Far

“Moorad’s second blunder, obviously, was hiring Jed Hoyer as Towers’ replacement.” followed by “Despite looking like a kid about to buy a prom night corsage, Hoyer seemed to know what he was doing. Like his predecessor, Hoyer was hamstrung by the Padres’ tight wallet.” – from Moorad goofed when he fired GM Towers, hired Hoyer

And my favorite contradiction of all, Canepa demanding the Padres cut Yasmani Grandal for taking steroids despite spending the overwhelming majority of his career not caring about steroid use in baseball:

“It’s a Stooges two-fingered poke in the eyes for me to say this, but Barry Bonds has a point. His Barryness wants Congressfolk to butt out of this steroid thing, which would be fine with me, but they won’t retreat when they can advance on an issue without resistance and get excellent photo-ops. He would like them to get on with running the country, which would be a great idea – if many of them were capable.

“I think we have a lot more issues in this country to worry about that are a lot more serious,” Bonds says.

He’s right, of course.“- from Bonds has a point: Steroids is a care-not issue to most

And last, but certainly not least…

“If you’ve spent any time around him you know that isn’t Dee.” – from Selig Fiasco Due to Poor Planning

“I’ve known local businessman/philanthropist/sportsman Fowler for a long time and I can’t think of anyone around here more respected.” – from Canepa: New owners don’t tease with false promises

Also, please don’t forget being factually incorrect from time-to-time, like when he said the Padres dealt no starting pitchers this offseason, despite dealing Jesse Hahn in the Derek Norris trade.

Now everyone can Canepa!

Nick Canepa has long overstayed his welcome as the most senior sportswriter at the Union Tribune. He needs to go.

Hell, Union Tribune, you could even cut out steps 2-3 (from the four step proposal at the beginning of this post) if you really want to. As replaceable as Nick is, it’s not like we necessarily want another one anyway. Regardless…whatever the Union Tribune decides to do between ‘Fire Nick Canepa’ and ‘Profit’, it’s probably better than not firing him at all. The Padres blogging community, among many others, is thoroughly sick of him.

2 responses to “Fire Nick Canepa / How to #Crayonepa”