One of the most antiquated and seemingly ignored aspects of modern managerial strategy is the strict implementation of a five man rotation.

It doesn’t require much evidence to suggest that giving your top arms more innings is a wise strategy. Who could argue with the strategic advantage in having your ace start 10% more at the expense of having your worst starting pitcher pitching 10% less. (Injury exposure aside, of course.)

But let me make myself clear here: I’m not even talking about using a four man rotation. I am only advocating skipping part of the rotation, when applicable.

That means any time your ace is available on full rest, he starts. To hell with maintaining a five man rotation when it really isn’t necessary to achieve proper rest.

To demonstrate this strategy, and how it would be applied for the Padres, I’ve gone ahead and filled in the Padres schedule with the proposed start date for our number one. Remember, any time the staff ace is fully rested, he starts. 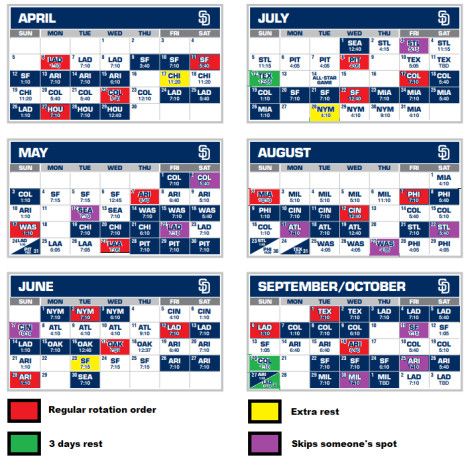 There are three instances where the Padres would pitch their ace on three days rest, although the last two are only out of necessity late in the season if they’re in the race and need the strategic lift. Prior to mid-September, there’s only one instance of short rest: just prior to the All-Star break in order to leverage the break into an additional start.

To balance that out, there are three instances of the ace getting the opportunity to pitch on extra rest. These are actually out of necessity, not by design, as it’s often impossible to avoid.

37 starts is 3 or 4 starts more than the number one traditionally gets; last year, number one starters across baseball who were healthy for the whole season got either 33 or 34 starts. That’s a volume increase of roughly 10% for that starting pitcher (and a similar decrease to whomever gets skipped in the rotation).

If that was all the manager did, the impact here is somewhat marginal: the difference between Clayton Kershaw and a replacement-level starting pitcher over four games is just shy of 1 win. The Padres top arm is worth just less than half of Kershaw, while their present options at the number five spot in the rotation are slightly above replacement, so we’re talking about an effect of less than half a win. But that’s still more than zero.

Additionally, if the Padres extend the same strategy to the rest of the rotation, giving priority to pitcher two when fully rested on down through the fifth starter, then we’ll actually end up in a situation where the Padres only need to give their fifth starting pitcher twenty-two starts in 2015. If you start throwing an arm or two on three days rest a few times in 2015, you can cut this number down to twenty fairly easily. Replacing twelve starts of near replacement-level with twelve starts from positive contributors is still a marginal effect, but starts reaching impact that is measured in full wins.

Which Padres pitcher to use?

One mystery which remains unanswered is which pitcher the Padres should use as this mystery ace. Ideally, it’d be someone currently not on the team with a history of logging a lot of innings at a level above the Padres current 1-3 triumvirate of Cashner/Ross/Kennedy.

If the Padres enter 2015 with the same group of arms as they currently have, the only option here is Ian Kennedy: Kennedy has the longest track record of logging significant innings of the Padres’ three most talented starters, while the Padres have no long term investment in him (since he’s set to hit free agency following 2015) should there be an issue with exposing Kennedy to 10% more opportunities to suffer an injury.

A more ambitious person may pitch Tyson Ross, since he’s statistically the best Padres starter, but the Padres have a lot tied up in Ross long term. Not just in health terms, either; the Padres will have to pay Ross arbitration values over the next few seasons, which will be inflated if he’s given extra starts.

However, if 2015 really is supposed to be their season, I can’t say I’d be too upset with them employing the strategy with Tyson Ross. Who wouldn’t want to watch a few extra Ross starts in 2015, especially if it comes at the expense of Despaigne or Erlin?

It’d be disappointing to see Bud Black continue to trot out a five man rotation when it is not necessary to do so. Having a rigid schedule for the rotation doesn’t do the team any good strategically. The main argument I’ve seen against this strategy – that the fifth starter may get rusty or be exposed to injury if his innings are sporadic and irregular – doesn’t make much sense to begin with: why would we be concerned about a replacement level player getting injured? Isn’t that what the term “replacement” was meant to embody to begin with?

The Padres are not the favorite for the NL West, despite being vastly improved in 2015. If they want a legitimate chance to win the division, they’ll need every advantage they can possibly get. This is one such advantage, with the added bonus of having the pitcher’s starts align with games against that top division foe.

One response to “Maximizing 2015 starts for the Padres’ number one”