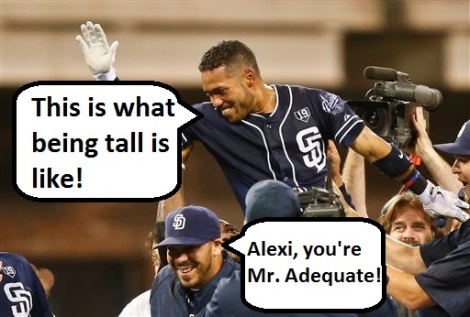 Well, he’s a problem.  But he’s not the biggest problem.  I’ve been the first to toss around some Alexi Amarista jokes.  You know, stuff like “What did Alexi Amarista say when I asked him for a dollar?  I’m a little short!”  Get it?!?!  Anyways, we all know he’s not a championship level shortstop.  He’s likely not even a MLB starting shortstop caliber player.  But he’s what we’ve got.  The hope for Alexi was always that he’d field as an above average shortstop in the field to help compensate for his putrid hitting.  Kind of like the opposite of what the hope was for Kemp and Myers in the outfield.  And Alexi is delivering on that hope.  His fielding has been above average, his hitting has been cringe inducing.

When you poll the Padres fan base, it seems like the obvious answer when you ask how to upgrade this team is to trade for a new shortstop.  I disagree, and believe this team can be a playoff team with Alexi Amarista at shortstop.  This argument comes down to two points: first, Alexi hasn’t been awful this year (strong praise), second, the marginal improvement from getting another shortstop likely doesn’t justify the cost.

Let’s take a look at where the Padres starters rank in WAR accumulated to date in 2015 compared to others at their position:

Alexi is hitting pretty much as poorly as we’d expect, batting only .193, and despite adding about .020 to his average OBP, his OPS is still lower than last season, sitting at a paltry .588.  But no one expected him to hit.  He is adding positive defensive value, enough to actually make him a net positive player when compared to replacement level.  In fact, he’s added enough positive defensive value to put himself solidly in the middle of the MLB pack of value added by shortstops.  He’s ahead of contemporaries including Jean Segura, Starlin Castro, Ian Desmond, Jimmy Rollins and Elvis Andrus.  So he’s not great, not by a longshot, but he appears to be good enough.  But that brings us to my second point: the possibly available upgrades at shortstop aren’t upgrades.

The wet dream of the Padres fan base is for the team to trade for Troy Tulowitzki.  There are a lot of reasons this won’t happen, largely that the Padres don’t have enough bullets in their gun after gutting the farm system this offseason, the team would be devoting nearly 50% of their payroll to two injury prone players in Kemp and Tulo that are on the wrong side of 30, and a possible inclination of the Rockies to not trade within the division.  It should also be noted that as of today, Tulo and Alexi are tied at 0.1 WAR produced in 2015 (not that I expect to stay the case as the season progresses).  Looking at the more productive shortstops to date in 2015, the only really attainable one would be Wilmer Flores on the Mets, who has produced 0.6 WAR so far, and that would really only be the case if the Mets go all in and trade for Tulowitzki (Dave Cameron at Fangraphs speculates it might take Noah Syndergaard, Amed Rosario, and Steven Matz, all Top 100 prospects), which would make Flores expendable.  Other than Flores, you’ve heard the names of Segura, Starlin Castro and Elvis Andrus pop up in trade speculations, but to date, all three are performing worse than Alexi.  Of course, they have more name value, and in Segura and Castro’s case, probably more potential, but the question has to be asked if what it would cost to get them is worth it for 2015 if they won’t necessarily add more value than Alexi.

In the end, Alexi Amarista is not a top shortstop.  No one will argue this.  What this team’s future really depends on is the pitching bouncing back.  If the pitching doesn’t bounce back, if Preller doesn’t add pitching if it ends up our current pitchers don’t improve, this team isn’t going as far as we’d hope anyways.  I think most of our assumptions are that the pitching staff will regress to the mean, improve performance, and help match the offensive output.  If that happens, which is critical anyways, Alexi Amarista performing slightly better than replacement level overall, adding solid defense up the middle which lord knows we need, is enough for this team.

What do you get when you cross Alexi Amarista with a computer?

One response to “Wait, Alexi Amarista isn’t the problem?!”