Obviously, Kevin Durant playing basketball in Oakland doesn’t directly affect the Padres. Maybe the San Francisco Giants lose some ticket revenue due to increased demand for the Warriors, assuming static entertainment budgets, but that’s nowhere close to what I want to talk about.

On multiple occasions, Padres owner Peter Seidler has talked about lobbying baseball to create a system that is fair for both big and small market teams. He mentioned this recently on the radio, and also stated this in his very first Padres Fan Fest question and answer session with fans, which I captured for one of the original Change the Padres videos:

In the current MLB landscape, it’s basically impossible to win the World Series without having one of the highest payrolls. In terms of World Series titles per dollar spent, it’s actually more efficient to spend as much as possible. The empirical evidence supports that additional dollars spent do not add marginal value; it adds exponential value. 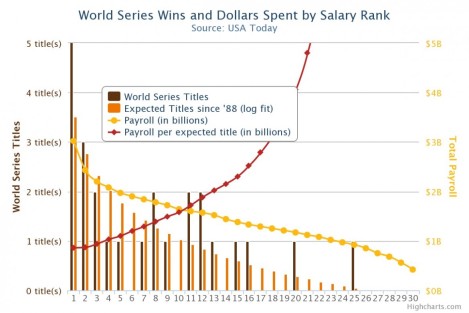 Really, nothing hints that the current system is broken more than that crucial fact, summarized by this paragraph I wrote in a Voice of San Diego feature back in 2014:

It’s like the Yankees purchased World Series titles like I purchase vodka to get me through the season: via Costco’s bulk discount. Meanwhile, the Padres purchase small fractions of a title at a corner store, paying off the credit card’s interest with interest of another kind: fan interest.

Presumably, you – Joe or Jane Padres Fan – think that a salary cap would be more fair. Unfortunately, that’s not true. The alternatives, like a salary cap and max offer structure, are broken in a different way, highlighted by Kevin Durant’s recent signing with the Golden State Warriors.

First, a quick primer on the NBA’s system. The NBA has a soft salary cap; teams may exceed the salary cap if they’re doing so by retaining their own players through the Larry Bird Exception. Teams that exceed the salary cap are then subjected to a substantial luxury tax. In addition to the salary cap, the NBA also (somehow) convinced the Players’ Association to accept a maximum contract clause. Whereas in baseball teams can throw $252 million at Alex Rodriguez, NBA teams cannot do so. They’re restricted to a four (or in some cases five) year contract at either 25, 30, or 35% of the NBA salary cap, depending on player seniority.

What this all means is that prospective teams that wanted Kevin Durant’s services had no true way to differentiate their offers from one another. Only the Thunder could offer Kevin Durant more money than other teams, but barely. (Another loophole in the NBA system incentivized Durant to sign a two-year deal, rather than accepting the full max.) Without a true differentiator that a team may offer, the single biggest factor influencing where a free agent will sign is the quality of the team. All else being equal, why not sign with the best team?

If the NBA’s league structure was different, Kevin Durant would not have signed with the Warriors. Just to lay out a few scenarios:

Of course, Durant could still have signed with the Warriors in either scenario, but it’s considerably less likely. In the first scenario, the Warriors would really have to go out on a fiscal limb to have paid Durant market value, especially if they were already forced to pay Steph Curry, Klay Thompson, and Draymond Green market value. And in the second scenario, they could only sign Durant if he was willing to take a significant pay-cut, since other teams could offer Durant all of their remaining cap space to entice him to sign.

Hence the folly of the NBA. The rich have gotten richer, spawning so-called “super teams”.

Which brings up a great discussion point: what is fair? If New York has 15 million fans and San Diego has 2 million fans, is it fair for both markets to have equal odds at a World Series title? If baseball instituted the NBA system, would it be fair if a good team with 1 million fans was able to offer the exact same financial deal that a bad team with 20 million fans could offer? It’s all a matter of perspective, rooted in semantics.

* If you absolutely insist, I actually don’t think Kevin Durant is a fantastic fit for the Warriors. Durant’s best two attributes – elite scoring efficiency (from a high volume of free throws and top quartile shooting ability from anywhere on the floor) and the length + agility to capably defend both shooting guards and power forwards on switches – are already present on the Warriors. The Warriors are probably more efficient with Klay Thompson or Steph Curry shooting, not Kevin Durant, so unless he’s satisfied with being option three, I don’t think his skills will translate into wins as well as they would on a team which didn’t already feature two of the best shooters in the league. It’s the basketball equivalent of signing Buster Posey when you already have prime Joe Mauer; yeah, Posey is super awesome, but you were already super awesome at pretty much everything Posey is awesome at. Don’t get me wrong: Durant certainly makes the Warriors a more talented basketball team. Whether that actually translates into a better basketball team will depend on if using Durant means using more efficient offensive players less.