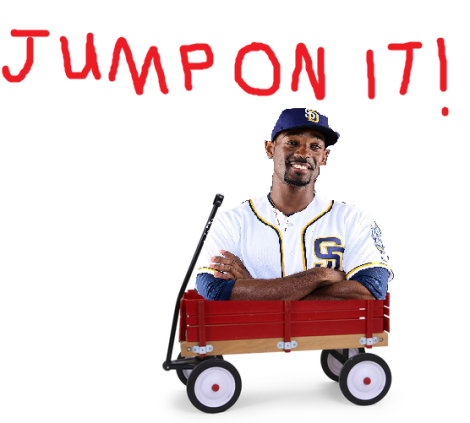 Here we are, a year after the first round of Jabari Blashmania, largely fueled by me.  Last year we saw Blash hit bombs in Spring Training, capped off by a home run that went about 500 feet in Mexico City at 7,300 foot elevation.  Blash made the Opening Day roster and was promptly kept on the bench by rookie manager Andy Green, given very sporadic pinch hitting opportunities.  Given Jabari’s profile of a three true outcomes guy, this infrequent usage did not play to his strengths, leading to a .120 batting average and eventually designated for assignment in May.  The Padres found a way to keep Jabari via trade, and gave him an opportunity later in the season after dumping Matt Kemp to start.  Blash got off to a hot start and then got injured, never to be heard from again.  This Spring, it was largely assumed that Blash was the odd man out and would be nothing more than AAA depth.  Then Blash started crushing the ball and Alex Dickerson started having a balky back.  In fact, here’s what’s featured on the front page of Padres.com right now: 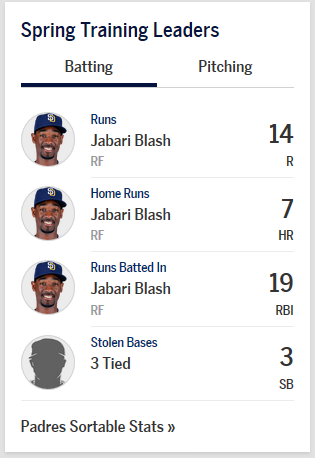 Now let’s not delude ourselves.  The #Blashwagon movement was never meant to be a prediction of future stardom for Jabari Blash.  He’s an interesting story with a unique background, a super nice guy, and has prodigious Pedro Cerrano-esque power, but he has a much higher likelihood of washing out and being a K riddled quad-A slugger that never cuts it in the Major Leagues.  In fact, here’s what I wrote last year:

When I started the #JumpOnTheBlashwagon movement, it was formulated first and foremost as a good bit, but also as a beacon for beaten down Padres fans to cheer for in a down season. Plus, maybe, JUST MAYBE, Blash can provide some sorely needed power and production for a team that may be lacking in offense.
When you’re facing a season of bad Padres baseball, sometimes it’s nice to have a little project to root for. After all, this is how we created the legend of #NORF. We created Will Venable, #PadreForLife. We rooted for Rod “Shooter” Beck to get 20 consecutive saves. We rooted for Jason Lane when he made a couple starts and completed an incredible comeback story. We can watch noted music video star Tommy Medica just barely miss the team’s first cycle. Things might look bad in the standings, but there are always little things we can cheer for to keep the season fun.

Jabari Blash is one of those fun things to root for.  It’s no secret that I am not a fan of using Spring stats to predict anything.  There’s not downplaying Jabari’s massive success at AAA including last year.  Blash OPS’d .929 at El Paso and was an important part of their PCL championship run.  This after OPS’ing .995 the year before for Tacoma in the Seattle system.  Blash is not a young prospect.  He’s at the S or get off the pot stage of his career, and luckily for him, he’s on the Padres, the team projected for the least wins this season; a perfect situation for him to get playing time, and prove himself.  Or he could be the new Matt LaPorta or Brandon Wood and wash out after putting up amazing minor league numbers.  There’s only one way to find out.

Listening to The Kept Faith podcast today, it sounded like the #Blashwagon bit had possibly jumped the shark.  That’s fine with me, it was always a bit to entertain myself.  I’ll root for Blash to succeed either way.  I know he’s not a slam dunk or even possibly maybe, but of all the Padres on the roster this season, I’ll be rooting for Jabari the hardest to succeed and find his place on this Padres team.  I watched Adam Dunn captivate Washington DC during his three true outcomes tenure there, and I’d love to see something similar here from Blash.  He’s going to strike out an awful lot, but unlike a guy like Hunter Renfroe, for instance, Blash will walk a ton too and insulate his on base percentage (Spring stats warning and all but Renfroe walked an abysmal one time in 70 plate appearances).  And as long as he keeps hitting bombs, Blash could be one of those guys that at least makes some of those cold Tuesday night games worth watching, and potentially makes the middle of the order with Myers, Renfroe, and Blash something to kind of fear.  Tank seasons are made for experimentation.  This is the entire basis of Make the Padres Great Again’s Keep The Padres Weird campaign.  If the team is going to lose, it needs to take the opportunity to evaluate the pieces it has and decide if they are going to be contributors on the next competitive Padres team next decade, and Jabari Blash is one of those pieces that needs a full evaluation.

For now, the #Blashwagon is getting ready to leave the station.  It might be headed for a Thelma and Louise style cliff, I’m not sure.  But I’m along for the ride, and there’s still seats available on the #Blashwagon. 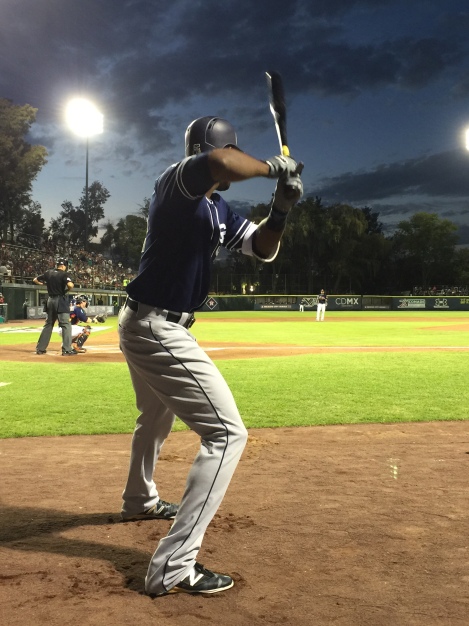 Blash before hitting a ball 500 feet in Mexico City

One response to “Let’s Check In On The Blashwagon”