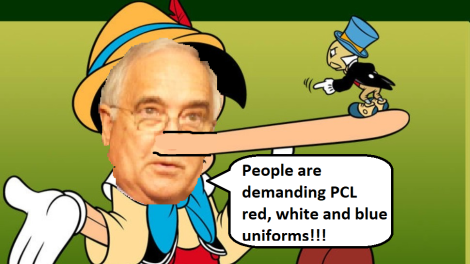 If there’s one thing Padres fans can share among each other, it’s wildly strong opinions on the uniform set.   This is partially a result of recent uniforms being total garbage, it’s partially because the product on the field has been total garbage for a decade, and it’s partially because we are an opinionated lot and uniform talk is more interesting than Alex Dickerson talk.  One fun activity for fans is to watch how the Padres front office avoids the issue of bringing back brown uniforms.  Sometimes they’ll assert that people just don’t like brown, sometimes they’ll go with people don’t care about uniforms, they care about the product on the field (which given historical performance, is not a great thing for fans to pay attention to).  And sometimes, they’ll come out of left field and say their “research” shows people want red, white and blue uniforms.  The only question for fans has always been if the front office will say anything, including lies, to avoid the issue or change the subject, or if they are just that incompetent or tone deaf.

Within the past year, fans have conducted two comprehensive studies.  Gwynntelligence’s own David Marver , extremely infrequent contributor, conducted an extensive analysis of social media sentiments of the Padres’ uniform sets, showing overwhelmingly that opinions on blue are primarily negative, and opinions on brown are primarily positive.  Just this week, Tim Arzaga from Gaslamp Ball conducted an ambitious online poll which sought to capture not only Padres fans, but fans of other fanbases, or even non baseball fans.  This provided a nice, broad view of what public sentiment was.  Tim found incredibly overwhelming data that brown was the most favored main color.  Both studies have their flaws.  Facebook data isn’t necessarily a perfect cross section of society, and online elective polls may have selection biases.  Without things like Padres customer data, these open source methods are as good as the general public can do without commissioning a survey company to perform a random sampling, but even that would have major flaws (it would include many non-fans or non-customers); in fact, it’s arguable that the two fan methods collect more valuable data from likely customers.

At the same time, you’d expect a billion dollar franchise like the Padres to be commissioning their own branding and uniform research.  In fact, Ron Fowler told fans a few weeks ago at the Social Summit on 29 September 2017 that they were about to start a “research project” on uniforms.  He promised the results would be “taken seriously”.  But shouldn’t they have been doing this?  Can fans trust the front office?  With notable liar Mike Dee no longer helming the team, are the people leading this “research project” trustworthy?  After all, all fans have ever asked for is to see the research.  I thought it would be fun to go back through time and look at the promises and commentary on the subject.

“A club poll of Padres fans, Garfinkel said, showed ‘a much larger segment of the fan base that was adamantly opposed to the brown.'”

Of course, this was before the Seidler/Fowler group bought the team, although it’s important to remember that Fowler was an owner in the previous ownership group that employed Garfinkel.

To refresh your memory, this Partello appearance was to quell the online rebellion clamoring for bring back the brown caused by the franchise having a 1984 throwback weekend.  It got so bad that they had to bring Partello on to kill 20 minutes of screen time by answering the least amount of questions possible.

Viewer Question: What type of research was conducted showing blue was the favorite?

“When Mike Dee joined the organization last year, I got here in November, we embarked on some brand research”

Viewer Question: Why not show us the research?

“The work is still taking place, we’re still working on this”

One fun note, the Padres cut this video in the middle of his answer at the 9:45 mark.

“I like to take in all the information, compile all the data, and recommend what I think is the right decision”

“Ron has looked at the data that has been done for years and looked at it and said that’s what the data says.  And today we are continuously researching to find the correct answer”

“We’re continuously challenging ourselves to find out the answers to define where we need to go as a brand and as an organization and with that comes asking a lot of questions, taking in the information, moving forward”

Partello on research supporting blue: “Ron was dead on, the research that we have seen, that’s 100% accurate”

Great to hear that Fowler and Partello have concretely, without a doubt, studied the research and data.  I mean, they said it publicly.  There is no way that this wouldn’t be the case at this point, right?

Bernie Wilson: “When I emailed Ron Fowler asking if I could see the research he cited in not bringing back the brown, he said, ‘No, you may not.’”

Maybe the research is proprietary or something.  It totally couldn’t be that there is no research, right?

“Partello and the new leadership are currently conducting market research to gauge support for a switch.”

Oh cool, the research is current and ongoing in July 2014.

“We’ve heard a lot of research and talked to a lot of folks and now it’s time for us to get to work and see what we come up with and make a decision.”

“Because the majority of our fans based upon both quantitative and qualitative research are not big on brown. We’ve got them on a weekly basis when we’re home on Friday nights. We are going to do a thorough research project and when this thing starts getting hot— I have more people telling us that they want uniforms consistent with the old Pacific Coast League Padres, the red, white and blue than brown so for now it’s blue with brown with fall backs for some other jerseys.”

So it sounds like the team has been doing extensive research, right?  The Chief Marketing Officer has claimed to be researching for three years.  Fowler is basing conclusions on the “quantitative and qualitative” the team has collected and he surely analyzed it.

“I have tried to get my hands on research that was done by prior ownership, I was part of that group. There was a very thorough study done, both quantitative and qualitative.”

“I would say that in the next year or two years, Kevin, we’ll do a deep dive with both quantitative research and focus group research that we’ve done previously, meaning this previous ownership group [of which Fowler was a part of] and we’ll make a determination”

“Assuredly, Executive Chairman Ron Fowler is not as tone deaf as some fans have interpreted. That’s an unfair claim. “

Check it out, Acee is slurping the nuts of local sports power players!  WEIRD!

“We should acknowledge the need for quantitative analysis and applaud the organization hiring outside professionals to provide an unbiased assessment of just how awesome brown is.”

If only this had happened in the past 6 months…

“We’re going to do the work,” chief marketing officer Wayne Partello said. “… No one’s eyes are closed or opposed to hearing from the fan base. It’s important to us, because it’s important to some people.”

And that brings us to the present.  Listening to the past three to four years of commentary, you’d think the team had compiled an impressive research dossier on what fan preferences are regarding uniforms.  After all, all they really need to do is call a local polling company and outsource it.  Unless you think their methods of doing pen and paper surveys in the members lounge at Petco is either scientific or accurate.  Fans were able to conduct massive studies on the subject in the past year with far more responses than any paid survey would sample.  So I mean, they’re probably all researched up and ready to make a decision based on all that data that fans are clamoring for, right?

Jodes Paranal, Gaslamp Ball: “Fowler says they are about to start a ‘research project’ on brown. Results will made public & ‘taken very seriously.’”

Jodes Paranal, Gaslamp Ball: “I forgot to follow up my tweet earlier, but Fowler told us that they “couldn’t find” the old research that was done under Moorad.”

Jodes Paranal, Gaslamp Ball: “I think he brought it up to explain why that research was never made public.”

James Clark, East Village Times: “Fowler rolled his eyes and said the team was about to do a major research project. This research project was confirmed earlier in the week, to me, by Wayne Partello. The last research project was completed in the Jeff Moorad era, which was roughly 6-8 years ago. In speaking of this mysterious research project, Ron Fowler dropped a bomb on the 20-plus in attendance. He claims that the initial report is lost and that is why the team cannot prove the results that did not favor the color brown as a permanent uniform color.”

What this tells us is that either Wayne Partello and Padres leadership told boldfaced lies to the fanbase about ongoing research on the topic, or they are totally incompetent.  My guess based on past performance is both, but at the least, it would be hard to conclude anything other than that Partello and Fowler lied in the above quotes.  So what now?  Well, let’s not get too excited about Fowler’s promise of a new “research project”.  We’ve been told that before, many times, and as we can see above, there has not been a lot of truthfulness on the subject.  This is totally aside from the likely lie or incompetence of Ron Fowler claiming that he only hears people clamoring for PCL red, white and blue which is difficult to believe given the extremely strong data from Marver and Arzaga showing almost NOBODY is clamoring for PCL colors.  Without full transparency in the sources, methodology, and results of the Fowler “research project”, the results will be hard for a fanbase, that has been lied to repeatedly for years, to take seriously.  Basically, what I’m saying on the subject of a study performed by Partello and Fowler that may lead to a return to brown uniforms is let’s not go sucking each other’s dicks quite yet.

One response to “The Padres Uniform “Research Project”: Let’s Not Go Sucking Each Others’ Dicks Quite Yet”