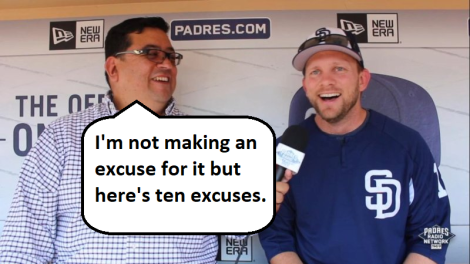 Here at Gwynntelligence, we’ve detailed just how awful the transition of the Padres radio contract to 94.9 has been, specifically highlighting a lot of awful work by Rich Herrera, the head of Padres Radio.  The highlight was his short lived, and terrible, Padres Unplugged podcast which lasted all of about a month and a half.  At about midseason, Padres Radio took Herrera off of most on-air work, replacing him with respected local broadcaster Ben Higgins, which slowed the bleeding with a dose of competence.  After that calm in the storm, a tipster sent in one of Herrera’s recent Dodgers podcast with Kevin Kennedy, Inside The Dugout (oh yeah, Herrera, the head of Padres Radio, does a regular Dodgers podcast).  Herrera and Kennedy discuss the Yuli Gurriel racist gesture made about Dodger pitcher Yu Darvish.

I know we take these things serious in our society right now but this is kind of uncharted territory.  A lot of times I’m amazed, and I’m wondering, when the Players Association is actually going to say stop taking pictures inside the dugout because a lot of times we see stuff on that camera that sits on the inside part of the dugout showing us stuff that no one in the stands can see but those watching on TV can see.

Herrera followed this up with:

This isn’t an excuse, it’s just a fact.

This will be a common refrain as Herrera frequently uses something I call The Acee Manuever where he says he isn’t saying something, and then says that thing a bunch of times after.  This way he can point back and say “I said it wasn’t an excuse” even though he then followed it up with ten excuses.

You have American culture, you have Japanese culture, you also have human culture, you mix all three in a pot together and everyone doesn’t see through the same lens because of where your culture and where you came from

This is Herrera’s opening salvo in an attempt to excuse the racist gesture because it’s just a peculiarity of a culture.  This is the equivalent of excusing sexual harassment because “boys will be boys”.

If I said this in a different context people would be screaming, but one of the biggest things you have to teach young Dominican players is how to use indoor plumbing

This is an incredibly broad statement about a country where, in 2009, 95% of citizens had access to improved water sources.  The paternalistic implications are that Dominican players, especially after Kennedy discusses “huts in jungles”, are savages being brought into civilized society, that Dominican Academies begin with Flush Toilet 101 classes followed by Advanced Hand Washing 201.  For a team heavily invested in the Dominican Republic, maybe the head of Padres Radio shouldn’t be demeaning the country based on 30 to 35 year old Geronimo Pena anecdotes from Kevin Kennedy.

I don’t think you can defend demeaning anyone…

Remember The Acee Manuever?  Do you think he’ll then defend it?

…but I do think you need to take a look at the lens and the prism that you’re looking through, whether it’s Gurriel being from Cuba and having a different culture and different way of being brought up

It was just that wacky foreign culture!  Executed to perfection!

Crazy idea but maybe we don’t need to respect outright racism as a “culture”.

Part of the issue here is that Rich Herrera, while not a direct Padres employee, is the public face of the Padres brand.  For a team that is heavily invested in the success of it’s Latin American players, it’s probably not such a good idea to have Herrera out there spouting unresearched and uneducated diatribes.  From a PR standpoint, maybe it’s not a good idea to have the Padres’ brand being represented by “boys will be boys” style excuses for outright racism, especially in a city with a large and vibrant Asian population.  While some had hopes that Padres Radio just needed to hit a learning curve, it’s become apparent that the real problems are at the leadership level, both within Padres Radio and whomever in the Padres front office decided to continue to entrust their brand and public representation to Rich Herrera.

It’s fun to remember how Wayne Partello refused to do an interview with Gwynntelligence because “Padres Jagoff” was too naughty and “bad for the brand” but Herrera is entrusted with being the Padres public facing voice, presence, and steward of their brand.