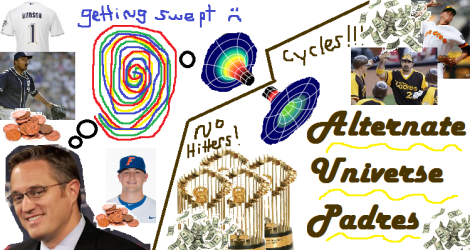 Now that the Padres have also announced the hiring of A.J. Preller, one gigantic question lingers: how will all four of the new general managers get along?

Before we can answer that, though, we need to recap how we got here. In a mildly surprising turn of events, the Padres have chosen to hire all four of the final GM candidates after management determined that all four could help the baseball team win another World Series.

Here’s what we know about the supplementary role each new hire will fulfill, in addition to their share of the GM duty:

Mystery, however, abounds with how the arrangement will ultimately work out.

Baseball fans with deep historical knowledge of the game may recall the 1961 and 1962 Cubs employing the “College of Coaches” strategy, where four different men rotated as the Cubs acting manager. The system ultimately proved fruitless.

To the best of our knowledge, though, no team has ever rotated GMs or employed a flock of GMs, like the now thinking-rich Padres will brazenly attempt.

But that’s our Padres, isn’t it? Unafraid to try new ideas and think outside the box. How could it be any other way?