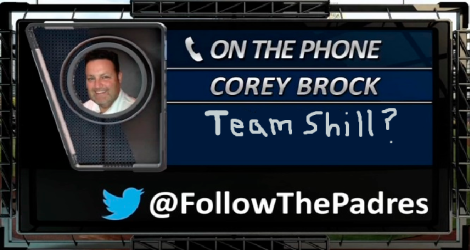 Let me start by saying I like pretty much everything that Corey Brock writes.  It is upbeat and he has in’s with the team that allows him to reveal facts not reported elsewhere.  The sheer volume of content he is producing is impressive.  I’ve met him in person at the Padres Social Hour set and talked LA craft beer with him.  Plus, he’s got twins at home that aren’t too far in age from Baby Padres Jagoff.  That said, I have never had any reservations pointing out that he is essentially a paid, team shill.  You will not find him writing a post criticizing Wayne Partello for firing a PA announcer to conduct a circus-esque internet search, you will not find him criticizing Ron Fowler for opening his mouth about literally any topic, and you will not find him criticizing Mike Dee for placing himself in a baseball operations role despite having no baseball operations experience.  That is because those folks are the ones employing him.  This was made even more apparent to me today when the Padres made their BIG announcement about an “organizational change” on the Tweeter.  At the exact second that the Padres sent out their “organizational change” announcement, Corey Brock issued his “confirmation” that AJ Preller was being hired.  It’s almost as if the two Twitter accounts were working in concert!  Or more likely, that the Padres issued to their subordinate an order to not “confirm” anything until the club was ready to make their big announcement.

Now I have heard that Brock is technically paid by MLB Advanced Media, which runs MLB.com and it’s affiliates.  This isn’t surprising, and I think it’s technically true that Corey doesn’t work directly for the Padres.  But I have no doubts that he is under instruction to not attack the team management, and to put the club in the best possible light under any circumstance through his posts.  I also believe that if the Padres wanted to remove him, they could work that through MLBAM.  They may not have an employer-employee relationship, but they certainly have one that is more closely approaching one more akin to a contractor.  Marver has requested a paystub from Brock to prove the MLBAM connection.  I don’t really see the value in that, because even if he’s paid by MLBAM, that is just a division of MLB that in the end, works for the owners.  It doesn’t really change the fact that Brock isn’t an independent journalist.

What does this mean for you, the Padres fan?  Like with Jesse Agler, Corey Brock provides plenty of great content, great reporting and in general, does a great job.  But take things he says with a grain of salt.  A couple days ago, the rumor was Billy Eppler was the frontrunner for the GM spot which led to a mini-Twitter uproar.  Like clockwork, Corey Brock then issued a fluff piece noting what a great hire Billy Eppler would be, combating the general outrage about the rumor on social media.  When you see something published by Corey Brock, enjoy it and consume it, but don’t think for a second that it wasn’t written in a way that Ron Fowler would approve of.

One response to “Recently In Bullshit… Corey Brock As Team Shill”