To the tune of Paul McCartney’s Band on the Run.

When you think of baseball franchise brands, what comes to mind?

Teams in baseball have differentiated their brands from one another in numerous ways over the years. The look, the baseball operations philosophy, and the playing environment are just a few of the ways that teams have done so. And, to-date, most teams have done a decent job of successfully associating their “brand” with a recognizable, positive characteristic.

Some have even embraced a negative characteristic and turned it into a positive, like the Cubs’ transformation of the “Lovable Loser” moniker. It’s an endearing term for the brand that now sits next to Wrigley Field as one of their most recognizable brand characteristics. Team president Theo Epstein goes so far as to credit the moniker for high fan attendance totals during competitive lulls.

He said that the Cubs’ reputation as “lovable losers” allowed the team to draw almost 2.9 million fans despite losing 101 games.

It should come as no surprise that those same teams go to great lengths to protect and promote their brand identity. Recently, the Yankees celebrated 100 years in pinstripes by having legend Derek Jeter further promote their brand:

You say pinstripes and the first thing that comes to most people’s mind is the Yankees.

Some teams even get so lucky as to have others promote their brand for them. For example, “The Cardinal Way” was literally the tagline of Howard Megdal’s best-selling book on the St. Louis Cardinals, The Cardinal Way: How One Team Embraced Tradition and Moneyball at the Same Time.

And in 2003’s hit film Catch Me If You Can, Yankee pinstripes were the subject of a famous exchange:

But not every team goes to great lengths to protect their brand identity. One, in particular, runs away from it: the San Diego Padres.

You’d think that a team with the Padres past wouldn’t have much of a brand to market at all. But despite their historical futility on the field, the Padres do have one marketable brand characteristic: brown uniforms.

If you’re reading this article, you’re probably well familiar with the Padres’ reluctance to commit to brown uniforms. Or any uniform, for that matter. Since my birth in 1987, the Padres have worn at least twenty-two different uniforms in regular season games (by my count of uniforms on baseball cards I own). Chris Creamer’s Sports Logos website shows the Padres are a branding nightmare, and the team page isn’t even fully updated: 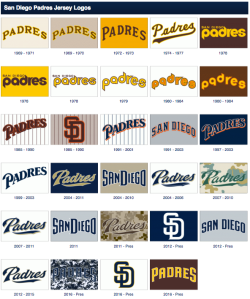 The Padres have had ample opportunity to embrace their true band, but have balked at every occasion. Why? My guess is that ownership just doesn’t like the color, and views the team as their toy. This, in turn, forces team presidents to do things like sourcing (or fabricating) flawed, internal polls as justification:

A club poll of Padres fans, Garfinkel said, showed “a much larger segment of the fan base that was adamantly opposed to the brown.”

So it should come as no surprise that the 2016 Padres also have a new uniform scheme: blue and yellow. And, for some reason, another new camouflage alternate. And a new brown alternate, for sales purposes. (Nothing screams “it’s ownership’s fault, dummy” more than seeing the marketing team parade the brown alternates without a true a conversion back to brown.) At this rate, their next uniform change – I’ll guess in 2017 – will be accompanied by a mascot change: The San Diego Chameleons.

(Of course, that’s if you don’t count All-Star Game 2016 as a true uniform change. That’s right: on the national stage the Padres won’t even get to wear one of their real uniforms, and will instead wear a one-time grey uniform. Apparently fondling Bud Selig’s ego wasn’t enough to get “uniform preference” included in the hosting agreement. Mike Dee never was a great negotiator.)

As if fan opinion wasn’t enough, the franchise’s most celebrated player, Tony Gwynn, aka Mr. Padre, was a strong advocate of brown Padre uniforms:

Brown is part of who the Padres are.

It’s definitely unique in baseball, because no one else has brown. How many teams have blue? How many have red? But none of ’em have brown.

That’s how we started, with brown. I’d love to see brown.

Perhaps the biggest joke of the Padres running away from their brand is their insistence that they are actually pursuing a brand at all.

@LybargerBrewery A fun atmosphere that is focused on creating memorable moments for our community while remaining focused on winning.

I mean, this is a team that couldn’t get their shit together on which brand look to promote during their exhibition series in Mexico City this spring:

"Hey Mike, do you think we should consolidate our promotion in Mexico around one look?"

But besides all that … besides eschewing brown, besides recently moving their Hall of Fame numbers to a less visible part of the ballpark, and besides naming a prominent part of their ballpark after perhaps the franchise’s worst enemy (Bud Selig) … Padres personnel continue to baffle fans by catering to opposing fans at Padres games.

Just yesterday, Padres Jagoff located Pittsburgh Pirates socks in the team store ahead of hosting the Pirates as they come to town. Earlier this year, the Padres were selling Los Angeles Dodgers socks:

I get it: “their money is green”. But for a franchise so obsessed with brand identity, you’d think a few extra bucks wouldn’t be worth stocking Dodger stockings. How many pairs of those socks do they even sell per game? Does it even exceed $500 in revenue? For a team so focused on optics, they’re sure myopic about it.

Well, the rain game exploded with a mighty crash
As we fell into the sun to a homerun
And the first one Fowler said to the second Seidler one there
I hope you’re having the deadline’s fun

Historically, the Padres don’t have much going for them. In nearly fifty years as a franchise, the Padres have won just one World Series game and currently hold the worst winning percentage of any active Major League franchise:

The hard truth is that because the Padres continue to dismiss their true brand identity, brown, it leaves them with only one consistent brand trait: losing. And not the lovable variety.

Here’s a random smattering of “Padres = losing” brand tweets from a single game:

If you're pissed off about anything just remember, at least you're not on the Padres.

The #Padres are a great team. (In some bizzaro parallel universe where the sky is yellow and the sun is blue)

The Padres are so trash

Let alone some of the things said during the shutout streak:

Even fans of the Lovable Losers empathize with Padres fans. That is their #brand now. https://t.co/UJaBUta2mT

Twitter eggs with zero followers even feel the need to pile on the Padres. That is their #brand now. https://t.co/wXVf0FCZhQ

Lifelong Padres fans ponder if decades is the right order of magnitude for a championship. That is their #brand now. https://t.co/2abue1xBJe

Well, the undertaker ticket taker drew a heavy sigh
Seeing no one else had come
And a bell was ringing in the village Mission square
For the rabbits fan base on the run.

You might be wondering why all the fuss about brand right now? After all, this isn’t exactly a new issue. Almost every Padres blog in existence – from GLB to Padres Public – has written extensively about brown uniforms and how it’s a unique identity for the Padres. Lee Jenkins even got Sports Illustrated to run a feature on Padres brown uniforms.

A few weeks back, I reached out to Padres chief turd polisher Wayne Partello for an interview on the podcast. Initially, he seemed to suggest it was possible, and arranged a phone call with me to discuss how it’d go. So far, so good.

And then we got on the phone. While I wish I could divulge the entire conversation, Wayne opted to comment on specifics off-the-record. So I can’t do that, without violating some level of confidentiality.

But I can pass along the summary: Wayne Partello is willing to come on the Gwynntelligence podcast so long as it a) doesn’t include Padres Jagoff and b) occurs in person. And, oh yeah, he has to get his boss to sign off on that. (Nevermind the expectation that I fly out to San Diego and opt to spend time interviewing Wayne Partello over, say, spending quality time with my friends and family.) So really, he’s only willing to host a Change the Padres podcast, not come on the Gwynntelligence podcast.

To get to the point: the Padres believe that my cohort, Padres Jagoff, is bad for the Padres brand.

I could not roll my eyes any harder.

Nevermind the actual crux of what they’re saying: that, after being taken for his money by smooth-talking front office folk for nearly a decade, one fan on a blog can’t make a few crude jokes at their expense without it degrading the product. That’s obviously silly.

No, my issue is that the Padres treat their brand – the one they pretend to have, not their true one – far worse than any MS Paint pixel penises ever could.

Among other things. And now consider what has happened to Johnny Manziel since the Padres selected him. Drug rehab, lying to the head coach, dressing up and impersonating someone else in order to party in Las Vegas. The list goes on and on.

That’s what the Padres are okay associating their brand with. A blogger providing a few laughs for Padres fans on their behalf should fly so far under their radar that the Padres actually have to look down in the standings to find it.

And the thing is: that’s not even their only questionable association. In the same year that the Padres drafted Johnny Manziel, they also let Charlie Sheen throw out a first pitch at an actual baseball game. And then, just last year, the Padres had Nelly perform a concert at PETCO Park just a few months after being caught with meth, marijuana, and handguns. And, oh yeah, the Padres choose to conduct official interviews of prominent team personnel with Dan Sileo … easily the most objectionable sports radio host in San Diego County.

The Padres should be plastering Jagoff’s masterpieces on the big screen at PETCO Park as a means of making Padres fans forget about Nelly, Manziel, Sheen, and others … not making podcast appearances contingent upon his absence.

Basically, making podcast demands contingent upon his absence and continuing to exclude Padres Jagoff from Padres blogger events, despite being a season ticket member through all the bullshit over the years, is another hypocritical, losing move by a losing franchise.

I guess that really is their true brand.

Well, the night was falling
As the desert world blue shirt turds began to settle down sang Top Gun in downtown
In the town It’s the brown they’re searching for us everywhere the team to wear
But we it never will be found

4 responses to “Brand on the run”